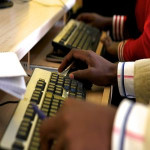 Wale Ajisebutu, vice chairman and CEO, 21st Century Technologies Limited, Nigeria’s information technology powerhouse was last night inducted into the ADA Hall of Fame, organized by Africa Digital Forum and Awards (ADA) in recognition of his foresight and courage in the telecommunications industry.

At the event held at Sheraton Hotels, Ikeja, the organisers said that Ajisebutu is a a shining example of a superb Nigerian who has brought value, candor and uncomplicatedness to the information and communications technology space.

A man of very few words, Ajisebutu has built one of Nigeria’s largest information technology hubs and has chosen to keep taciturn about it.

His company 21CTL was founded and registered in 1997 and began operations in 1999, all in the 20th Century; a testament to Ajisebutu’s vision of better tomorrow for his dear country-Nigeria.

A chattered accountant by profession, Ajisebutu understands the economics of business management so well that it is almost second nature.

He is a perfectionist who believes that every Nigerian deserves nothing but the best quality of service.

Responding on behalf of the inductees, Ajisebutu dedicated the honour to the over 600 staff of 21CTL and paid glowing tributes to Rauf Aregbesola for encouraging telecommunications when he was the Commissioner for Works in Lagos state.

Ajisebutu also spoke of on going rejigging of his company which has resulted in the creation of four divisions to ultimately build Nigeria’s mega ICT firm with hands and legs in software;  largest data centre; online retailing; courier; training; and so on.

While thanking the organizers for the honour, he assured that his company will continue to be at the forefront of the promotion of access to ICT facilities for Nigerians.