Apple’s Next Big Project: Free Courses to Make Its Stores the Most Happening Places in Town 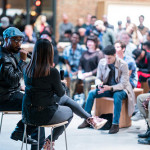 Apple will launch 60 educational sessions at all its stores focusing on coding, digital media, and art and design.

Apple will soon launch a range of educational sessions at 495 stores covering coding, media, and art and design to help people get more from their Apple hardware.

Apple says 60 different programs will be launched at the end of May at all 495 Apple stores worldwide.

There will also be a Business Circuits program in select stores to connect small business owners with entrepreneurs. On weekends, Apple will offer a Kids Hour session, featuring lessons in music making and coding with robots, while teachers are invited to join Teach Tuesday to learn how to use tech in the classroom or help young coders learn Apple’s Swift language.

In an interview with CBS News, Ahrendts said the Today At Apple program was the “software” component of a global Apple store “hardware update”, which will introduce new screens and spaces for meetings and classes.

Ahrendts references Apple’s other design updates, such as the new Genius Grove at the San Francisco store, a tree-lined version of the Genius Bar.

She said the goal is for Apple stores to become a social gathering spot like Starbucks. She’s told Apple teams,

“I’ll know we’ve done a really, really great job if the next generation, if Gen Z says, ‘Meet me at Apple. Did you see what’s going on at Apple today?’.”

She looks at Today at Apple as a way to build for Apple’s retail business the services that Apple has for its online platforms.

Key sessions include Photo Walks. which will help participants capture action on video, while Sketch walks will focus on drawings, watercolor, and brush techniques. The Kids Hour will include coding with Sphero robots, and using GarageBand and iMovies.

It will also offer an introduction to coding via the Swift Playgrounds iPad app. Others include a Photo Labs session, Music Labs, an editing-focused Pro Series, and sessions for people who want to learn from musicians and artists.