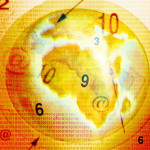 «ARMADA has been experiencing strong growth. In the first half of 2011, the company has achieved strong results in all strategic areas of business: software development and implementation, IT services, and acquisitions. By raising additional equity capital, ARMADA managed to take over a leader in software development for the healthcare industry in Russia, and has sufficient funds to finance several other M&A deals, which we planned for this year,» ARMADA chairman of the board of directors Alexey Kuzovkin said.

ARMADA’s revenue increased 44% YoY to RUB 1,404m during the first half of this year. Revenue rose in the group’s two core business segments.

The revenue in the segment of software development and implementation surged 163% from RUB 177m to RUB 465m. Most of this increase was attributable to the organic growth, while small portion of revenue was generated by PMT, acquired in May 2011.

Revenue in the IT services segment, which includes IT outsourcing, system integration, training and project management, rose 18% from RUB 799m to RUB 939m. This growth rate is in line with the average expansion of the Russian IT market. According to IDC analysts, outlays on IT in Russia are expected to grow at an annual average rate of 16.8% in 2010 — 2014. The Communications Ministry projected Russia’s IT market to rise 15% in 2011, while PMR, a market research agency in Eastern Europe, forecasted 22% growth.
Shares
ARMADA placed around 2.4m ordinary shares or 16.7% of its upsized share capital in a secondary public offering (SPO) at USD 13 per share in April 2011. ARMADA’s free float stood at about 57% as of July 1, 2011. The company raised USD 23.5m in the SPO and acquired 589,848 of own shares which are now listed on the balance sheet of its 100% subsidiary and are to be used to finance future acquisitions.

In May of this year, ARMADA purchased a controlling stake in Post Modern Technology (PMT), a software developer which operates in the healthcare sector. MEDIALOG medical information system, which was developed by the company, is a leader in the Russian market (according to CNews and PC Week’s ratings), and has been introduced by more than 30 partners in various Russian regions and in Europe. «According to the Health and Social Development Ministry, only 20% of all medical institutions in the country currently use information technologies in their work. Within the next five years, the ministry plans to phase in information systems in all state medical institutions across Russia,» General Director and one of the founders of PMT Andrey Borisov said. The deal was partially financed using the proceeds raised during ARMADA’s SPO.

Throughout the year, group companies that participate in infrastructure projects take out short-term loans to finance transactions and repay those loans at the end of the year. ARMADA group has no long-term liabilities.

ARMADA’s management team intends to focus on achieving 25-30% revenue organic growth in 2011 and maintain margins on high level of 2010. ARMADA also plans to press ahead with its M&A strategy. The company’s focus is on small software and service companies that could compliment ARMADA’s business, with a profit margin exceeding 10%. These companies should also be leaders in their market segments. ARMADA has free funds and the ability to take over several other promising IT companies before the end of 2011.