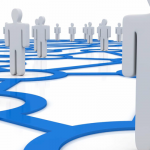 Financial market volatility, restructuring and the complexities of a foreign listing led Europe’s no.7 IT player to shift its focus towards Russia – a market it has long promised to conquer.

The blue chip group, which has built up its position through a series of acquisitions in recent years, had hoped to raise between $200 million and $300 million from its Nasdaq debut and flag its presence on the world’s largest market.

“Works are ongoing, we need at least a year more. It has to be prepared carefully,” Asseco Chief Executive Adam Goral told a news conference on Monday.

Russia’s IT market is twice the size of Poland’s at 14.3 billion euros with an annual growth rate of around 18 percent, but Polish business has so far not gained a strong foothold there because of historical grievances.

“We have signed a letter of intent after months of negotiations,” Goral said.

“We target a majority stake in one of Russia’s biggest players on the finance and banking IT market, operating also around the former Soviet Union,” he added, without giving any further details about the Russian company.

Asseco, valued at $1.1 billion, wants to ink the deal in October, paying with its own cash. CEO Goral would not be drawn on the possible price, stressing only that it should not take all of Asseco’s 440 million zloty free cash cushion.

The group, which operates in Europe and in Israel, surprised the market with a six percent rise in its second-half net profit to 91 million zlotys on the back of a 22 percent leap in sales to 1.4 billion – 70 percent of which it generated abroad.

It now has a group backlog of 4.86 billion zlotys – 77 percent of which is built on its own software, but has to fight to keep up margins after it lost one of its most lucrative contracts, with insurer PZU PZU.WA, to U.S. Guidewire (GWRE.N) earlier this year.