Atos Launches the Highest-Performing Quantum Simulator in the World 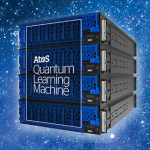 Atos, a global leader in digital transformation, today introduces the world’s first commercially available machine-system capable of simulating up to 40 quantum bits (Qubits). The simulator, named ‘Atos Quantum Learning Machine’ (Atos QLM), is powered by an ultra-compact supercomputer and a universal programming language. Available in 5 power configurations (30 to 40 Qubits) to cover the needs of different organizations, Atos QLM enables researchers, students and engineers to develop and test today the quantum applications and algorithms of tomorrow. The machine, designed by the ‘Atos Quantum’ laboratory – the first major quantum industry program in Europe, launched in November 2016 – has developed several top-class innovations which have resulted in numerous patent applications.

At the announcement of the Atos Quantum Learning Machine Thierry Breton, Chairman and CEO of Atos, said:

“Today, by unveiling the highest-performing commercial quantum simulator in the world, Atos reaffirms both its ambition to be the industry leader in Europe and its role to accompany its clients from the outset in what is likely to be the next major technological evolution. Quantum physics will lead to profound changes notably in cybersecurity, one of the key strategic priorities of businesses. We must be planning for the impact of these today. The teams at our Atos Quantum laboratory have made remarkable progress, recognized and supported by an internationally renowned Scientific Council, to provide, today, scientists and engineers from around the world with a simulation environment which enables them to develop quantum algorithms to prepare for the major accelerations to come.”

Whereas Moore’s Law[1], which governs the microprocessor industry and has structured computing for over 50 years, will soon become obsolete, the quantum computer – based on the principles of quantum mechanics – is expected to overcome the physical boundaries of present-day computing, thus opening up new opportunities, particularly in intensive computing.

…and anticipating the next major disruptions in cyber security

Amongst the calculating capabilities offered by quantum computing is quasi-instantaneous factorization in prime numbers (Shor’s algorithm) which would make most of the current asymmetric encryption algorithms, such as RSA - the basis of all current internet security and banking systems – vulnerable.

It is for this reason that Atos is already working to implement ‘quantum safe’ security algorithms, the level of complexity of which would allow data to be protected from any unlawful decryption, including by a quantum computer.

This is why Atos has developed the Atos Quantum Learning Machine (Atos QLM), the first commercial quantum simulator, powered by a universal programming language and a new ultra-compact supercomputer. Atos QLM will also be used to work towards new quantum algorithms, and will be available for the entire scientific and developer communities.

The teams working in the Atos Quantum laboratory have developed a universal language:

Thanks to this universal configuration, aQasm enables connectors, which carry programs from other quantum simulators, to be developed.

The fact that this machine is the same size as a standard business server means it can easily be installed on-site at all types of clients.

As work progresses, Atos Quantum continues to work with a world-renowned Scientific Council, the last meeting of which was on 31st May, and which approved the scientific value of Atos’ work.

Earl Joseph, CEO at Hyperion Research – formerly IDC Research – was impressed by the announcement and commented:

“There is real excitement about new technologies like Quantum Computing, however many Athings are needed to help users learn how to program and use Quantum computers. By providing universities, research institutes and both large and small businesses across the world access to its QLM, Atos is enabling organizations to experiment with Quantum computing and prepare for this potential revolution in computing. With this announcement Atos is providing a market accelerator for learning how to do Quantum computing.”

In the coming years, quantum computing should be able to tackle the explosion of data brought about by Big Data and the Internet of Things. Thanks to its innovative targeted computing acceleration capabilities based in particular on the exascale class supercomputer Bull Sequana, quantum computing should also foster developments in deep learning, algorithms and artificial intelligence for domains as varied as pharmaceutical or new materials. To move forward on these issues, Atos plans to set up several partnerships with research centers and universities around the world.