How Bacteria Could Improve Soft Robots 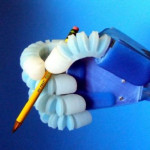 E. coli is bad when it contaminates your food, but it can actually be good for robots. Scientists say synthetic bacteria could eventually repair a robot, generate energy, or detect chemicals in the environment.

E. Coli gets a bad rap, but scientists are using the notorious bacteria as a sensor. A team of researchers at Carnegie Mellon University and University of California Davis used genetically engineered bacteria as sensors for a robotic gripper. Their experiment demonstrates how living cells can give robots more functionality without adding bulky, expensive electronics.

The researchers engineered E. coli microbes to detect chemicals in the environment. They added these biosensors to their robot by trapping E. coli inside the pores of a 3D-printed gripper. Then they exposed the E-Coli-soaked gripper to a chemical activator called IPTG. When the microbes were exposed to IPTG, they expressed fluorescent proteins. A flexible LED circuit that was embedded in the robot’s gripper detected the light from the protein. Based on these electronic signals, the soft robot then moved its “fingers.”

This information helped the robot make decisions about how to pick-and-place objects. When the robot was dipped in a solution containing the chemical, it moved a target object. If the gripper was dipped in a bath that didn’t contain the chemical, it didn’t pick up the object. Although this was a lab experiment, a similar setup could eventually be used to help robots in the real world make decisions about which objects they should handle, and which they should leave alone. 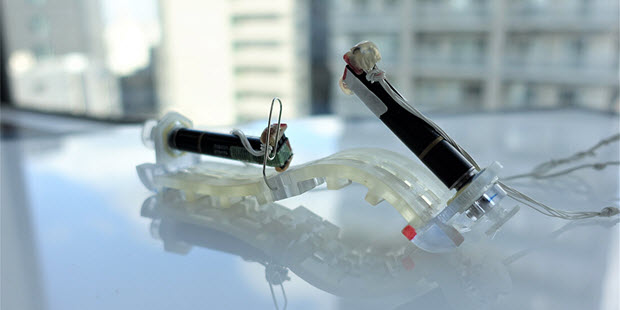 “Our vision is to build a synthetic microbiota for soft robots, akin to the symbiotic relationship between the gut microbiome and human,” Cheemeng Tan tells ZDNet. “The synthetic microbiota could repair the robot, generate energy, or detect chemicals in the environment.”

The research team is sponsored by the National Oceanographic Partnership Program to create new classes of soft robots that can perform sensing underwater. In the future, bacteria could be applied to a soft octopus-like robot that can move underwater autonomously for an extended time and detect/remove hazardous chemicals.

Researcher Carmel Majidi says, “Because the robots are soft and mobile, they can interact with other marine organisms or maneuver through delicate marine habitats, where they can use chemical sensing to monitor water quality or map change conditions in the marine environment.”

The researchers describe their experiment in the latest issue of Science Robotics.