Benefits Of Outsourcing IT Services 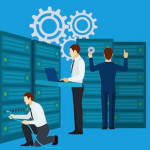 Outsourcing IT services is something that became extremely popular in the past two years, and it looks like more and more people are getting interested in it. Because of this reason, we’ve decided to write an article which will serve as something that will clarify all the benefits of outsourcing an IT service. If you want to learn more about this topic, feel free to read until the end. Without further ado, let’s take a look.

We’ll start with the most important one, which also happens to be one of the things that a lot of people misunderstand about managed IT services. Finding a person who is tech savvy enough and training them to work as IT staff in your business is something that is already hard enough and will also cost a lot more. Outsourcing IT is much cheaper, has similar monthly bills all the time and also lets you use your human resources in a place where you need them the most, instead of wasting them in the IT department.

Just like we’ve mentioned earlier, even if you manage to find a person who already has basic IT knowledge, and then you train them to become the IT person in your company, you will still have to spend a lot of time, money and effort in order to make that come true. And even if you do manage to pull it off somehow, it still won’t be as effective as outsourcing a professional IT company that has many certificates and experience.

Competition in the Corporate World

According to Elevate Services Group, a company that doesn’t invest in managed IT is most of the times getting overwhelmed by its competitors, and if you allow that to happen to your company you will most likely go out of business in a really short time. The reason for this is because IT services help in many different areas where most businessmen are not experienced enough to act.

For example, a good businessmen might know how to lead a company and manage things related with it, but it doesn’t mean that they know how to properly and efficiently run a marketing campaign, what kind of audience to target with it and many things of that nature. The outcome is simple, companies that invest in managed IT are more successful than those that don’t.

Staying on the Edge of Technology

If you have your own IT person which you trained yourself, they will know as much as you do. Which means, if you are not keeping up with the latest technology at all times, they won’t be doing it as well. Outsourcing IT services means that you will always be getting the help from people who are constantly staying on the edge of latest technology, and whenever you have a new project to start, they will be ready for it. After all, experience is something that matters the most, especially in the corporate world, so don’t let yourself be overwhelmed by other companies simply because they invested in IT services and you didn’t.