Bulgaria Can Become Regional ‘Engine’ for ICT Industry in Europe 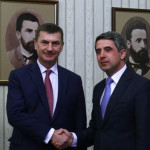 Bulgaria has the potential to become an “engine” for positive change in Southeastern Europe as regards the plans of the European Commission for the Single Digital Market, according to President Rosen Plevneliev.

Plevneliev met with Andrus Ansip, the European Commission Vice-President for the Digital Single Market, on Monday in Sofia.

During the meeting Plevneliev praised Bulgaria’s traditions in the area of information technologies and programming.

He also pointed out that Bulgaria had the ambition to become a regional information and communications technology (ICT) hub.

“We see ICT clusters as an important part of the development of the Bulgarian economy,”

Plevneliev said, as cited by the press office of the President.

He emphasized that Sofia was third in the ranking of top destinations for start-ups in Europe after London and Dublin, while Sofia Tech Park boasted a unique innovation ecosystem in the region.

Plevneliev suggested that the development of the Single Digital Market would benefit both EU citizens and small and medium-sized enterprises (SMEs), adding that SMEs would get easier access not only to the digital market but also to high-quality administrative service.

Bulgaria’s President insisted that the only way to success for the EU involved integration and connectedness.

He explained that Bulgarian authorities were working to develop a model to unite all administrative services in a single electronic platform, thereby saving time and money for citizens and businesses.

Ansip said that the establishment of the Single Digital Market could contribute to additional growth amounting to EUR 340 B in the EU.

“In physical terms the EU has a Single Market but in digital terms there are 28 small markets with different regulatory policies and this creates barriers,”

He mentioned the three key spheres of focus for the development of the Single Digital Market, including facilitating the access of consumers and businesses to digital goods and services, creating appropriate infrastructure, and introducing standards for the industry.

Ansip is on a 2-day visit to Bulgaria to take part in a public debate organized by the European Commission on the future of Europe, electronic government, and the Single Digital Market.

The European Commission will present its Digital Single Market Strategy on May 6.