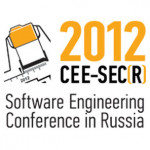 CEE-SECR 2012 — the key software event in Russia and CEE countries. It will be held on 1-2 November in Moscow and will bring together leading experts of the software industry. We invite speakers, sponsors and all interested to take part in the CEE-SECR!

Organized since 2005, CEE-SECR is the key annual software event in Central and Eastern Europe that is regularly attended by about 1000 participants from local industry. Our total reach is over 1 million software and IT people from CEE region (online + media coverage).

The conference was supported by such companies as Adobe, EMC, HP, IBM, Intel, Microsoft, ORACLE, Siemens, Sun Microsystems, T-Systems, VMWare and others. It is also endorsed by the most of key local software/IT associations.