The ‘Cloud Shift’ Grows: Gartner Predicts More Than $1tn IT Spend Affected by 2020 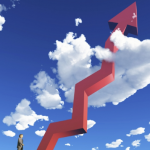 IT spending has long since been shifting from traditional IT offerings to cloud services – and according to the latest prognostication from Gartner, more than $1 trillion (£759bn) of IT spending will be directly or indirectly affected by the shift to cloud in the coming five years.

The aggregate amount of ‘cloud shift’ in 2016 is estimated by Gartner to hit $111 billion, going up to $216bn by 2020. Business process outsourcing – with the cloud segment of course being business process as a service (BPaaS) – has a cloud shift rate of 43%, with a cloud shift of $42bn out of a $119bn overall market size.

“Cloud-first strategies are the foundation for staying relevant in a fast-paced world,”

“The market for cloud services has grown to such an extent that it is now a notable percentage of total IT spending, helping to create a new generation of startups and ‘born in the cloud’ providers.

As organisations pursue a new IT architecture and operating philosophy, they become prepared for new opportunities in digital business, including next-generation IT solutions such as the Internet of Things,”

Angelo Di Ventura, a director at IT services provider Trustmarque, argues there is ultimately no one-size-fits-all model for making cloud work for a business.

“A combination of dated licensing models not designed for cloud, a lack of compatibility of existing business applications and the intricacies of cloud integration all pose questions for today’s organisations,”

“The transition from an internet-enabled business to a digital business running in the cloud represents a huge jump for the majority of IT departments, whose existing infrastructure is designed for ‘business as usual’ operations.”

Back in 2013, Gartner argued that service led solutions – SaaS, IaaS, PaaS – will begin to displace more traditional sourcing methods by 2015. Among more recent research, Gartner assessed that the global CRM software market totalled $26.3bn in 2015, up 12.3% from the year before.