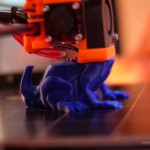 The world’s biggest showcase for consumer technology firms, tech heads, and those wanting to get a glimpse of the latest innovations, has just closed its doors. Some Czech companies have been coming to the Las Vegas-based Consumer Electronics Show (CES) for a while now but this time round it has also been a showcase for the first time for some Czech start-ups.

Over the last 50 years, it was launched in 1967, the Consumer Electronics Show has developed as the place to see and be seen if you’ve got a cutting edge application or design. Everyone from the world’s biggest consumer electronics multinationals to the start-up from a guy in his garage is on show. And with the Czech Republic seeking to boost its reputation as a regional technology hotbed, established and start-up companies used the four day event to set out their wares.

One of the established show participants is the Czech 3D printing company Prusa Research which has already sold tens of thousands of printers worldwide and been recognized as one of the best printers of its kind in its price range.

The company founded by 27-year-old Josef Průša when he borrowed 200,000 crowns off his parents now produces around 3,000 printers a month and employs 90 people. And its been able to maintain its rocketing growth record which has surged from a turnover of 2.5 million crowns in 2014 to 250 million crowns currently:

“No-one believed that we could do it. At the start when you are developing it’s easy to go from 100,000 to 200,000. That’s 100 percent growth. But in the phase we’re in now it’s more difficult but we are still doing very well. From the turnover findings of the last few months it looks like we will be hitting the one billion crown mark.”

The price tag for the Las Vegas presence does not come cheap at around 500,000 crowns. But Průša believes that it will be worth it:

“If a company is coming to CES it has to have a good enough product so that it can be paid for from the earnings. If the company is a start-up, then there’s the Eureka Park.”

Eureka Park is the haven for start-ups with around 600 firms from 33 countries taking part. And Czech companies, four in all, were there for the first time, thanks in part to help from the Czech state agency to promote businesses, CzechInvest.

One of those start-ups is Six Guys Labs. It has come up with a series of applications and equipment that allow a pet owner to track the activity of their dog and cat and calculate whether their food and water intake is what it should ideally be. The tracker on the lead is linked to the food bowl. Robert Hošek is the company’s representative.

“Our product is primarily aimed at the US market where there is a big problem with obesity.”

Other Czech start ups putting a bet on a Las Vegas presence were a Brno company offering tailored connectivity and entertainment for the aged, a Děčin based photo treatment and services firm, and an Ostrava producer of electric skateboards from hi-tech materials.