How Much Does it Cost to Develop a Messaging app Like WhatsApp? 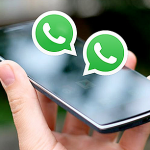 Until the end of 2016, there will be about 25.2 trillion text messages sent (According to Juniper Research). No wonder why messengers are so popular nowadays.

Though there are such big players in the market as WhatsApp, Viber, Facebook Messenger, Snapchat, and others, there are still enough opportunities to create an app like WhatsApp and bite off the considerable market share.

All you need is a good idea (we bet you have one), the strong development team that you can find at The App Solutions and brilliant marketing.

Before we start, let`s take a quick look at the market and at your future competitors: 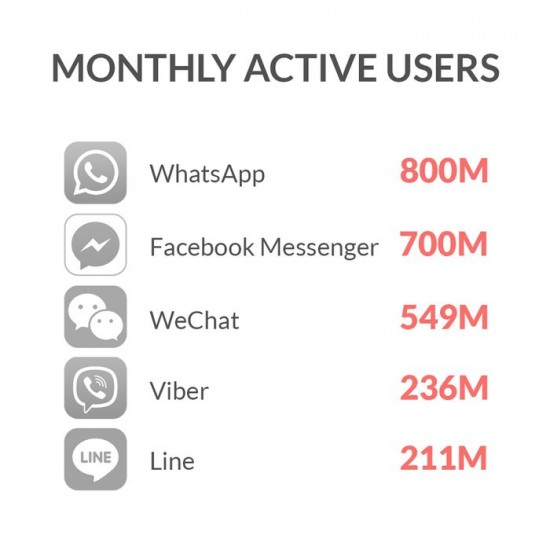 As you can see, WhatsApp is heaving a leading position in this chart. Despite the fact that Facebook bought this messenger in 2014 for $22 billion, WhatsApp has the largest audience that sends over 30 billion messages per day.

Apple WWDC16 proves again the rapid evolution of instant messaging app sector and the innovative changes to the iMessage confirm the intention to compete for the first place in the global market.

I want to highlight the most exciting moments from WWDC16 concerning new iMessage features. All these you should take into account while creating your killer features:

The other massive trend which can not be ignored is an augmented reality extension for messengers. We all saw in our newsfeed those Superman eyes and cute puppy noses on our friends that appear thanks to Snapchat and MSQRD app. The last one was also bought by Facebook recently, by the way.

Let`s look at this issue a little bit wider than just for the tool of exchanging short instant messages. According to the GlobalWebIndex, the growth of adoption is at around of 75% of internet users that use some the messaging app.

In its turn Business Insider shows how quickly messaging apps have hit the milestone and caught up to social media network users: 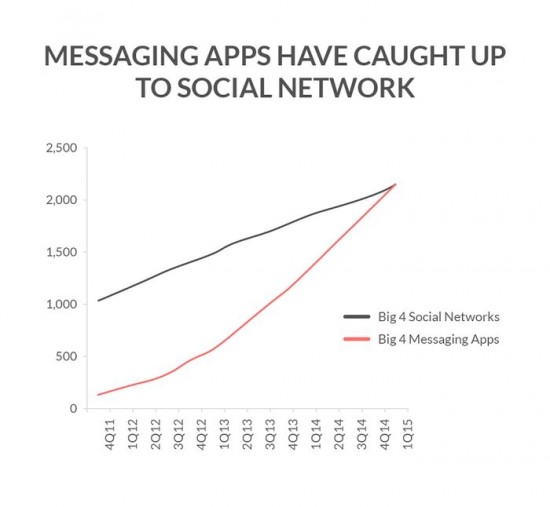 As you can see from this chart, all together WhatsApp, Facebook Messenger, WeChat, and Viber have about 2.2 billion active global users per month. The important takeaway for you here is that all these audiences consist of mobile users.

Put together “The Big 4 Social Networks” users of Facebook, Twitter, LinkedIn, and Instagram, and you will see the same 2.2 billion benchmark. The only difference here is that number also includes millions of computer-only users!

How much does it cost to build an app like WhatsApp?

As WhatsApp is the leader of the market, I will appeal to its features and functionality to describe the whole development process and help you to determine what makes up the expenses. The cost to develop an app like WhatsApp depends on the enormous amount of different factors.

Of course, there is the basic kit of features that actually make a WhatsApp clone the another messenger. The approximate cost starts from $20-30K and includes following kit of features.

At the first time, when a user enters the app, he needs to sign it. The most convenient way to do it is to use his existing phone number. In WhatsApp, they also use SMS confirmation code because of the security reasons.

The next step is to add contacts from the address book. Make sure step move is very quick and convenient. The more friends the user have in the messaging app, the more chances that he will use it. You should also consider adding a Facebook profile or other social networks depending on the type and purpose of your app.

This process takes more time and messaging app development cost, though. The chart bellow shows the time spent without connections via social networks:

Profile customization option helps users to create their customs profiles and express their individuality. They can change names and nicknames, background colors or patterns and fonts.

This option will cost you a couple of hours of your developers. To be more exact it is about 12 hours for iOS app development, 16 for Android and eight more hours to provide backend.

This function is a bit more complicated than it seems to be. It is evident that your messaging app supposes to send back and forward messages between users.

But also it assumes to store the conversation history and provide users with it in case they logged in on another device. For instance, WhatsApp doesn`t store the messages on its server what makes their life much easier.

So, to make the primary text exchange feature between two users, you need:

We bet that your users won`t be satisfied with this single characteristic.

Especially considering the trends that I have described above. Think about other possibilities that add additional value and give a unique experience to your user. The good example is Snapchat that deletes messages in few seconds after the reading. Also, users are in love with stickers that help to express their feelings.

Today custom stickers and smiles became an inseparable part of the digital dialog and sometimes even can turn into the additional income. You can let users create their stickers. This will bring you more engagement to your app, and this is exactly what we are trying to achieve, aren`t we?

The other important feature that you need to consider if you want to build WhatsApp like app is a group chat. This option lets your users create their chat with the friends, invite new people and eventually transfer all communication into your app.

Of course, this feature entails the messaging app development cost growth, so you can add it after your MVP is ready and launched. For a more precise planning here is the average time of app developers team:

It is tiny, but quite an important feature that informs your users about the new message. Notifications should be implemented in your app yet while developing The MVP. Our developers use Google Cloud Messaging and Apple Push Notifications for that. Here is the average time for applying this feature into your WhatsApp clone:

You can also consider to let your users swap their photos, gifs, memes and another photo, video, and audio content. Detailed analysis and study of this option even can give you a clue about the distinctive features of your app. For example, in iOS 10 that is going to arrive in fall 2016, users can add some text or draws on photos or pics. Nice try, though. The chart below shows the average time needed to implement multimedia file transmission feature.

It also makes sense to provide synchronization with cloud services like Google Drive, Dropbox, Evernote or others. Take into account that this option requires time additional resources.

If you want to ensure your users with contact sharing function, it will entail additional 7-8 hours for iOS and Android and about 10 backend hours.

The option to share your location can be very helpful for your users. And if you make it even more advanced, don`t be surprised if your users will use it to navigate each other, set up meetings and stuff like that.

Also, you can think about implementing indoor geolocation technologies into your app. iBeacon and Eddystone sensors can catch your users when they are passing by and send messages. This technology is very popular among retailers now. Think about the possibility brand is chatting with the customer into your app!

Of course, this was an incomplete list of possible features. I dare to assume that this can go on forever, and the only limitation is time and budget.

Here are some more features:

This feature is new even for WhatsApp, and it was added to attract more users. And they succeeded. To compete with such giants as WhatsApp or Viber, this option is essential. Of course, you can release your app without it and add it later.

It involves a significant amount of recourses, but the result worth it. To reduce time spending, you can use open-source communication libraries (WhatsApp uses PJSIP library). Anyway, this feature is one of the most time-consuming ones and can take about 160-200 hours for developing.

The messaging market shows continuous evolution, and there is still a chance to create a WhatsApp clone app that will get a decent market share. The development cost depends on four key factors that you are to decide before creating a messaging app:

Also, don`t forget to set up benchmarks and KPI`s. For the app that provides instant messages, three essential metrics are a number of active users, retention rate, and audience engagement.