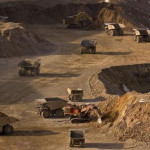 Mining companies are failing to take advantage of digital technology to address productivity issues, says advisory firm Ernst & Young (EY), which believes that digital transformation is a critical enabler to tackle productivity and margin challenges in the mining and metals sector.

A new EY report, “The digital disconnect: problem or pathway?”, points out that the current rate of digital progress is out of sync with the scale of opportunity for many companies.

While 84% of the 700 respondents to the report have considered, or were starting on their own digital path as part of their day-to-day business, just 31% of respondents in the sector say digital is high on the agenda at their organisation, while 15% say it is not on the agenda at all.

“Productivity remains the top operational risk facing the sector and companies know that traditional cost cutting is not enough to address this challenge. Embracing new digital technologies is crucial to improving productivity and commercial outcomes,”

“The mining and metals sector has a long history of adopting new technologies, including plant control systems, global positioning system technologies, automated haulage and data storage. And, yet, many companies face substantial challenges in turning their long-term digital vision into a reality,”

Mitchell noted that the concept of digital mining was not new despite the sector’s reputation for falling behind other industries in embracing digital, adding that companies had been quick to take advantage of technological developments in the past.

“However, we now see a disconnect between the potential from digital transformation and the poor track record of successful implementations,”

A number of common pitfalls were driving the digital disconnect between mining and metals companies’ vision of a digital future and their current ability to actually achieve it.

These range from a perception of high costs to ill-defined business models and a lack of detail on the implementation pathway.

Several industry players were also convinced that mining was simple enough not to warrant investment into digital technology.

“Companies are nervous when it comes to digital investments. Many have experienced failed attempts in the past, and they don’t want to go down that road again. Many do not have a clear view of what their current capabilities are or where they want to go in the future. It’s navigating this path that is key. Those miners that are working toward defining their digital future are on the right track. It’s those that do not take advantage of digital advances that are putting their future at stake,”

The report outlines how digital can optimise plans and productivity rates across all operations and manage variability under any conditions, enhance asset availability and reliability, help understand true end-to-end capability and systems bottlenecks thereby supporting loss elimination, and increase agility and responsiveness to changes in market factors.

“Companies need to apply the same rigour that underpins other change programmes to their digital transformation. Only then will miners achieve the end-to-end process change the sector needs to achieve the next level of productivity.”