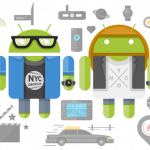 Droidcon is a global developer conference series and a network focusing on the best of Android. The idea behind droidcon is to support the Android platform and create a strong network for developers and companies.

The 9th edition of droidcon Berlin takes place from September 3-5, 2017 at Messe Berlin. droidcon Berlin 2017 will again consist of a barcamp and two conference days. The first droidcon Berlin in 2009 had 300 attendees. Since then, the conference has grown continuously. In 2016 more than 900 Android enthusiasts came to Berlin.