Munich, September 06, 2010: At about EUR 17 billion, sales from IT outsourcing services will have increased by approximately EUR 4.5 billion in the DACH region in 2010 compared to 2005. Over the same period, the share in overall IT spending – an important indicator of the maturity of the outsourcing market – has risen from 9 to 13 percent. These are some findings from a report by the market research and strategic consulting firm Pierre Audoin Consultants (PAC) on sourcing trends and supplier positioning in Germany, Austria and Switzerland.

According to the PAC report, the established, big players in this market segment have not all been benefiting to the same extent from the positive trend. A comparison of the years 2005 and 2009 shows that most of the established providers have lost market share, partly to individual competitors, but mostly to a large number of “newcomers“.

A services market segment like outsourcing, which is heavily dependent on economies of scale, is normally dominated by a few large providers. The top 5, for instance, account for nearly 45 percent of the market in Germany; in Austria, they hold almost 70 percent. The remainder of the market is highly fragmented, with the number of outsourcing providers approaching 100 in the DACH region alone. 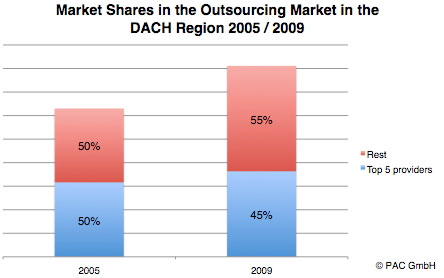 Positioning of the Leading Providers

The positioning in the individual countries varies, though. In the Swiss market, IBM leads with a market share of nearly 19 percent, followed by Swisscom IT Services, HP and T-Systems. Accenture and CSC rank 5th and 6th. In Austria, on the other hand, Siemens SIS – with a market share of 23 percent – is clearly ahead of its major competitors, IBM, Raiffeisen Informatik, HP, and T-Systems.

In Germany – by far the biggest market – T-Systems still ranks first, with a market share of almost 13 percent, albeit very closely followed by IBM. HP, Siemens SIS, Atos Origin and Fujitsu are the challengers with the largest sales volumes.

It is remarkable that Infosys, an Indian player, has made it into the top 20 outsourcing providers in the DACH region. In Switzerland, the company even ranks 7th.

Evolution of the Top Providers’ Market Shares since 2005

A few outsourcing giants clearly dominate the market. However, the evolution of the market shares of the leading suppliers since 2005 shows that this dominance has actually been dwindling.

HP, for instance, has gained quite some share in all markets after taking over EDS. When looking at HP’s performance from a pro-forma perspective (i.e. 2005 figures including EDS), though, HP has distinctly lost shares in some markets.

IBM has maintained its positioning in Austria and Germany since 2005, while slightly losing market share in Switzerland.

T-Systems has lost market share to competitors in all three countries. Siemens SIS has gained some share in Switzerland as well as in Austria over the period considered; in its home market, however, Germany’s second “local hero“ has also lost some share.

Swisscom IT Services has improved its position in its home market, Switzerland. Raiffeisen Informatik has also slightly gained market share in Austria.

Atos Origin has expanded its share in the Swiss outsourcing market while losing ground in Germany and Austria. CSC, too, has gained ground in Switzerland while seeing its share slightly fall in Germany.

Capgemini’s market position has remained largely unchanged over the period in question.

In many cases, companies starting from a rather low revenue base, but constantly generating growth above market average, have gained market share. These include, for instance, Accenture, Computacenter or Wincor Nixdorf in Germany. Fujitsu has also gained further ground particularly in Germany; even from a pro-forma perspective – including TDS and Fujitsu Services – the supplier has expanded its market share.

The big players have also lost quite some share to the growing number of “new” suppliers. Above all, some Indian providers have established themselves in the outsourcing area. In Switzerland alone, as many as four India-based players (Infosys, TCS, Mahindra Satyam and Wipro) are among the top 20 outsourcing providers.

Moreover, the challengers include niche suppliers specializing in one or a few services, industries or regions. There is also a large number of service providers that are normally not considered as outsourcing players, but that offer various kinds of operational services. They include the growing number of hard- and software companies offering their products “as a Service’’, as well as “e-business’’ players such as Google and Amazon; in addition, there are telecom operators with an expanding IT services business, systems suppliers pushing into the managed-services market, and highly specialized BPO providers.

“The market will continue to be dominated by a few “outsourcing giants” and we even expect individual providers to strengthen their positioning as a result of ongoing consolidation“, says PAC analyst Karsten Leclerque. “On the other hand, the progressing diversification of the services available on the market will increase the share of the market that a rising number of suppliers will carve up among themselves. The cake has been growing, but the individual slices have been shrinking“.

As part of its “DACH Outsourcing Research Program“, PAC publishes detailed analysis and market figures on the outsourcing topic.

About Pierre Audoin Consultants (PAC): PAC is a global market research and strategic consulting firm for the Software and IT Services Industry (SITSI). PAC helps IT vendors, CIOs, consultancies and investment firms by delivering analysis and advice to address a range of growth, technology, financial, and operational issues.

Our 30+-year heritage in Europe – combined with our US presence and worldwide resources – forms the foundation of our ability to deliver in-depth knowledge of local IT markets, anywhere. We employ structured methodologies – undertaking thousands of annual face-to-face interviews on both the buy and sell side of the market, as well as a bottom-up, top-down approach – to leverage our research effectively.

PAC publishes a wide range of off-the-shelf and customized market reports – including our best-selling SITSI® program – in addition to our suite of strategic consulting and market planning services. With 16 offices across all continents, we deliver the insight that can make a difference to your business.