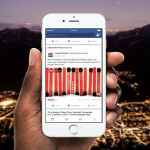 Book readings, interviews, and news radio are coming to Facebook thanks to its new Live Audio feature launching today with a few publishers and authors before opening up next year. A complement to its Facebook Live video streaming, it could bring audio-first content like podcasts to the News Feed, and provide a low-bandwidth real-time broadcasting options to publishers in low-connectivity areas.

In case you want to keep browsing while you listen, Android users will be able to close Facebook and use any other app while Live Audio keeps playing. iOS users can only browse the rest of Facebook with the stream running, while opening another app will cut the sound.

“We know that sometimes publishers want to tell a story on Facebook with words and not video” Facebook tells me. When publishers create a stream, they can either use their Page’s cover image as the default Live Audio image in the News Feed, or upload a different one. Notifications will be sent to a Page’s Live subscribers, and some of their most active followers. Broadcasts have a nice, long limit of four hours so they should accommodate a wide range of content, such as:

Facebook has been rapidly expanding its real-time content offering. After rolling out Live video at the end of 2015, last week it beta launched Live 360 video and Livestreaming from Oculus VR to the News Feed. Facebook’s engineering might may allow it to leap-frog Twitter, which got its Periscope acquisition launched before Facebook Live, but has stagnated since.

Between being a free streaming format, and the traffic that Facebook can drive, Live Audio could appeal to a wide range of publishers. And for average users who have something to say but are camera-shy, Live Audio reduces the friction to becoming a broadcaster.