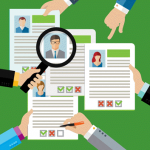 As LinkedIn ads in video and other features to look a little more like Facebook, Facebook continues to take on LinkedIn in the world of social recruitment services. In the latest development, Facebook is testing a feature to let users create resumes — which Facebook calls a “work histories” feature — and share them privately on the site as part of their job hunt.

First made public by The Next Web’s Matt Navarra on the back of a tip he received from a computer science student called Jane Manchun Wong, the test was confirmed to us by a spokesperson at the company as part of its efforts to grow usage of its recruitment advertising business, which was launched in February this year.

We’ve been looking around, and so far the only evidence of the test appears to be coming from an Android mobile device.

Interestingly, Facebook is testing this resume service to reduce some of the friction between finding a job and then applying for it on mobile specifically, to make it easier and faster to apply for jobs with a ready-made career and education history. That is a use case that LinkedIn also identified a while back, using its basic profile pages as resume proxies in its own mobile-based job application flow. Facebook, of course, has a wider purpose than career advancement, so its basic profile pages don’t quite fit that need.

On its surface, Facebook’s resume feature appears to be an expansion of the work and education details that you can already provide around your Facebook profile, including the period of time you’ve worked in a job or studied somewhere, and your contact information:

In the case of the resume, though, the key difference is that the information doesn’t post directly to your profile. Today, users only have two options for handling that kind of information: either making it completely public or just visible to your friends (but not entirely visible unless you choose to share it). The resume will have a more targeted use: you can show it off only when you choose to, as part of a job application.

Facebook took its initial step into the recruitment market in February this year when it launched its first job ads as a basic page that let you look for jobs they way you might look for goods for sale on Facebook’s Marketplace: by location and keywords. In the months since then, it’s worked on several tests and expansions of the service to figure out how to get more traffic to this new part of its site.

They have included plans to connect users in mentorships to help create a wider culture of career advancement on the platform (something LinkedIn has also been building); and ramping up the volume of job ads on Facebook by way of a partnership with ZipRecruiter, an aggregator that lets businesses post to Facebook’s job site along with dozens of other online job boards.

One notable thing to me about Facebook’s recruitment efforts is that while they have the  potential to take on LinkedIn in the world of white-collar jobs, Facebook is taking a very mass-market approach: in my area, I’ve seen jobs for lawyers and designers, but also bus drivers, housekeepers, and other service workers.

In a sense, it makes this not unlike the approach that Facebook has taken with Workplace as a competitor to Slack: the latter has positioned itself as a communications tool for the professional class of workers, the former is trying to target them, but also everyone else. (And now those businesses can also use the platform to recruit more.)

Another notable data point: just as Facebook’s collecting of profile interests helps the company build out its social graph and data points for advertising and more, so could this resume builder help the company develop better ideas of where to target its job ads, as well as other kinds of advertising aiming at particular demographics.

It remains to be seen how far Facebook will be willing to go to grow its footprint in the very crowded area of online recruitment, which already has a number of huge players including Randstad (which owns Monster.com) and Recruit (which owns Indeed.com), among many more.

In Facebook’s favor, though, there is definitely a case of noise and signal when it comes to recruitment, and social networks have had a much higher hit-rate when it’s come to getting qualified leads for open positions.

“People are interacting on a wide variety of subjects, not just jobs, so it feels very organic,”

He told TechCrunch that social platforms tend to perform well in recruitment because employees can tap their networks and so inbound interest tends to be less random.

“They deliver good quality candidates. People who come through the network of current employees can be vouched for.”