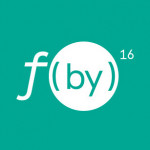 F(by) is the only functional programming conference in Belarus.

This year we have decided to focus on web development with functional programming. Presentations will be divided into 2 blocks: backend и frontend.

In the backend-part we’ll see how tasks, that are standard for web, are being solved on such languages as Clojure and Scala, we’ll also talk about functional approach in Kotlin.

In the frontend-part we’ll focus on reactive programming with the use of functional technologies. We’ll show how reactive programs are written with such languages as ClojureScript, PureScript, JavaScript, TypeScript.