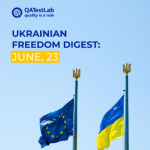 Every two weeks, QATestLab — an international independent software testing provider with a big team of professionals in Ukraine — shares news about the situation in Ukraine and in their company. Today they posted another Ukrainian Freedom Digest:

To support Ukraine’s course towards global partnership, QATestLab works daily to replenish their portfolio with international projects. To provide high-quality testing services to as many companies as possible, the company has launched a special summer offer: a 25% discount on testing according to their dedicated team model. The promotion is valid until September 20, 2022, and gives a fantastic opportunity to get a continuous and smooth software testing process paying 25% less. You can find more information on the company website.