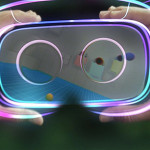 Google has announced a new stand-alone DayDream headset that cuts the cable and eliminates the need for a VR-enabled smartphone.

To be precise it has revealed to its I/O Developers conference that it has developed a Qualcomm-based reference design for a headset and HTC and Lenovo will be the first to produce it by the end of 2017.

“The mobile gaming gadget would make it easier to try virtual reality games, as it would no longer require a tangle of cords or tax your smartphone’s battery. The idea is that you have everything you need for VR built right into the headset itself. There’s no cables, no phone, and certainly no big PC. The whole device is designed just for VR. Getting into VR is as easy as picking the thing up.”

From what iTWire can glean, Google is positioning this well above its Google/Cardboard/Glass by using Google Tango, an augmented reality platform using built-in dual wide-angle cameras to scan the surrounding environment. The new device would also track your position with WorldSense that will be launched later this year.

“World Sense enables what’s known as positional tracking and with it, your view in the virtual world exactly matches your movement in the real world. It works by using a handful of sensors on the device that are looking out into your surroundings, and that means it works everywhere, there’s no set-up and no cameras to install,”

Unity, one of the dominant games development engines, commented that it would natively support the new headset although some graphics and other features will need to be scaled back to allow for the fact that standalone Daydream headsets will run on smartphone-style hardware rather than a PC.