How Buyers Can Avoid a Big Outsourcing Pitfall

Outsourcing Center studied a slice of these buyers. The study found some disturbing trends: (a) what the buyers didn’t know, and (b) what they did about it.

Who are the buyers in the study?

Outsourcing Center analyzed the findings from information reported by 64 of the buyers participating in its 2010 Outsourcing Excellence Awards program, whose relationships had been in existence for longer than one year and had moved beyond the transition phase. Half of these buyer companies (50 percent) assigned someone without prior experience or training to manage their outsourcing relationship.

Based on their industries, there was also a fairly even split among the types of companies that comprise the inexperienced managers segment (healthcare, manufacturing, financial institutions, telecommunications, energy/utilities, insurance, and travel).

There is, however, a notable finding around the contract-signing year for the relationships. Figure 1 displays the contract signing years of all of the study participants along with a breakout for the 50 percent that had inexperienced, untrained relationship managers. As the chart shows, there is not a significant difference in the years for the total group studied as opposed to the breakout 50 percent segment. What is significant is the number of deals signed in the years 2003 – 2009.

Figure 1: Comparison of contract-signing year of the total study participants with the contract signing-year of the inexperienced, untrained relationship managers 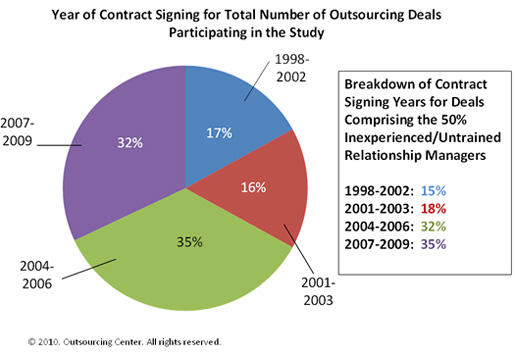 This is a significant (and disturbing) finding because industry articles, white papers, conferences, etc. started in 2002 and 2003 (with a heavy emphasis on this again since 2007) to really hammer the fact that buyers managing their outsourcing relationship is essential for successful outcomes and that, without effective management, outsourcing deals can fail completely or at a minimum fail to completely achieve their anticipated outcomes.

So what happened? Did these buyers ignore the clear message about the importance of relationship management?

What the buyers didn’t know, which led to challenges

Recalling the early stages of their outsourcing relationships, several buyers in the Outsourcing Center study made comments along the lines of: “We were told we needed someone to manage the relationship, but we really didn’t know what that meant.” This led to two primary directions the companies took in selecting their relationship managers:

Both of the above mindsets led to situations the relationship managers described as “a lot of challenges.” Those challenges fall into 10 main areas. The buyers described them as follows:

Any one of the above knowledge-lacking areas would create problems for an outsourcing relationship, and most of the study participants stated they had more than one of these characteristics.

What the buyers did to correct the problem

Having experienced multiple challenges from the relationship manager’s lack of knowledge, some of the companies then invested in relationship-management training after the fact.

What kind of training did the companies invest in for their relationship managers? The study found a range from paying for formal training programs at universities and with leadership/executive/management coaches to paying for attendance at industry conferences or for industry analyst/consulting materials. Their training efforts focused on the following topics:

However, a disturbing finding of the study is that only 29.13 percent of the companies with inexperienced managers invested later on in relationship-management training even after experiencing challenges from lack of knowledge.

Problems arising from a relationship manager’s lack of knowledge don’t need to happen, and a manager’s trial by fire doesn’t need to occur either. Companies can easily avoid the pitfall of potential relationship failure that awaits relationships managed by someone lacking the knowledge of how to drive the relationship to achieve the intended goals.

Even without funding for formal training, there is a wealth of free information about relationship management available in hundreds of articles and white papers on Outsourcing Center (and many other Internet sites). In addition, some of the study participants reported that they or their companies set up an informal mentoring relationship for the managers with experienced peers.