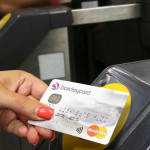 On December 12, contactless payment by Mastercard was launched in the Minsk Metro. IBA Group introduced the near-field communication (NFC) technology as a part of the Automated Fare Collection System (AFC).  At present, it is only accepted at the Plošča Lienina station in Minsk.

IBA Group specialists have developed the functionality as a result of a growing demand for contactless payments, including payment by bankcards, smartphones, smart watches, and smart bracelets, from Belarusians and foreign visitors. In addition, the system supports payments made via the recently launched Samsung Pay service with Mastercard bankcards.

The first metro gate which features the contactless payment service was launched in September 2017 and previously it accepted Visa payWave cards only. According to Minsk Metropoliten, 40-50 commuters use bankcards daily to pay for their journeys, while 35 percent of passengers still use tokens.

Representatives of Visa said that the system also accepts cards issued in Italy, the US, China, and other countries. In the near future, contactless payment will be launched at the Kamiennaja Horka and Plošča Jakuba Kolasa stations.

The service is introduced as a part of the IBA Fare Collection System (AFC).  The AFC System covers 3,000 buses, trolleybuses, and trams, as well as two Metro lines, six trains of the city lines of Belarusian Railway, and 500 suburban buses. To date, IBA Group implemented the AFC System in Minsk and Gomel (Belarus), Kaliningrad (Russia), and Dushanbe (Tajikistan).