The Internet Is the New Geography: Nation-States Beware, Netizens Are the Citizens of the Future 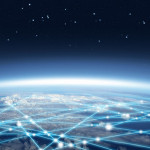 Is geography losing its relevance? Do country’s borders have any significance in the twenty-first century? Internet users, who are basically netizens scattered all around the world, today constitute the new global commons instead of the traditional nation-states and their citizens.

This new reality has already broken the norms of socio-economic discourse and the way everyone is conducting his or her day-to-day life. The internet has made the world so interdependent that it has completely blurred the physical boundaries of the world in such a way that no one can escape its influence and resist the phenomenon.

As per the World Development Report 2016, greater Internet access has led to an explosion in the production and consumption of information around the world. A typical day in the life of the internet, sees 207 billion emails sent, 8.8 billion YouTube videos watched, 2.3 billion GB of web traffic, 803 million tweets, 4.2 billion Google searches, 152 million Skype calls and 186 million Instagram photos. This shows the enormity of the internet and the sheer number of its users.

A rapid digital revolution and technological changes are sweeping the world and making it more prosperous and inclusive.

Internet is the new geography

Is this really happening?

Today, an individual generates tremendous amount of data pertaining to his or her activities throughout the day, in finance, social, education, commerce, entertainment, governance and every other aspect one can think of. This data acts as a user’s identity in the internet space.

Data that characterizes the individual user is going to become the new norm. These data are mostly captured by global platforms like Facebook, Google and others. So, the new game is that whosoever manages this user-data is able to shape the global political and financial landscape.

These platforms are providing more choices and greater convenience to users through the process of inclusion, efficiency, and constant innovation.

A country’s sovereignty will be increasingly difficult to maintain as there will be a conflict between loyalties of virtual and real citizens. Even today, the opinion polls are conducted globally on variety of complex issues affecting the politico-economic scenarios.

As the internet users, who are 3.4 billion today and will soon reach over 7 billion by 2020, the Nation-states are facing the cross-border influences and grappling to unite their citizens. The internet platforms are quick to analyse and provide the required information to the user, ultimately start managing users, and slowly takes them away to its way of governance.

If we look at the global scenario, the internet is a major factor for dynamically changing cross-cultural habits, entertainment, education, economy and politics. The internet is encouraging more cross-border exchanges of goods and services, thereby allowing consumers and firms to bypass national borders. The day is not far when political and economic conversations will be such that, there will be a profound impact of cross border happenings, affecting the local (in country) political and economic dialogues.

The talks are already on among various stakeholders to see how the internet can be better managed, with coordination across nations along with other stakeholders, and serve as a powerful platform to facilitate global cooperation.

Why is this happening?

The hard truth facing Governments is that they simply do not have the bandwidth to tackle data of this mammoth scale and variety. Moreover, legacy government systems are not in a position to cater to the dynamically changing socio-political scenarios and to devise ways to address the same.

Facebook has more than 1.5 billion users; Google has 1.2 billion users, which are more than the population of any country except China and India. These are, in fact borderless platforms cutting across the nations dealing with all aspects of human life. Today Google and Facebook, together account for majority of the activities without the involvement of the respective countries where the user is based. These internet platforms are shaping and designing the work culture and facilitating all kinds of day-to-day activities of individuals as well as associations.

If we look at the various activities of human beings on a daily basis, it is mostly governed by the platforms provided by Google, Facebook, and Twitter, etc. These platforms are making the citizens glued in such a  way that  financial, political, entertainment ,education , all are happening through them while the e-mail, SMS, WhatsApp and Skype have taken over all kinds of traditional communication services.

Interestingly, disruption is the new norm, changing completely the social, governance structures and existing norms. Look at education, entertainment, commerce, politics – for instance, online availability of content in a huge variety of subjects in education has completely changed the educational scenario.

Entertainment is also becoming global as cross border themes are more often used in Bollywood as well as in Hollywood. It is not Facebook alone, but others like Google, Amazon, Baidu, LinkedIn, Alibaba, Twitter and Microsoft that are catering to the needs of its users and are investing heavily in relevant technologies.

Governments of the world are increasingly losing their grip on their citizens due to a variety of reasons. The main reason for this is the disruptive technology and the way technology is catering to the needs of every user/citizen in a manner that helps him/her to achieve the goal/needs at a pace suited to him.

It is no longer the case of one size fitting all. The specific requirement of each user/citizen is different in terms of social habits, entertainment choices, sports/gaming, education, health needs, financial requirement and each of these features calls for massive computational power, algorithms, machine learning and AI, storage and memory systems, etc. Presently, these massive requirements in a gigantic scale to cater billions of users are not available with the governments.

As per Facebook, they run tens of trillions queries per day to make about six million predictions per second. Facebook trains the algorithms that power its News Feed within hours using trillions of data points. The company updates its learning models every 15 minutes to two hours so that it can react quickly to current events. Further, its image recognition models could recognize human faces with 98 percent accuracy, even if they weren’t directly facing the camera. It has also reached a capacity to identify a person in one picture out of 800 million in less than five seconds.

Even the governance of the internet doesn’t follow the traditional, Government-led approach; rather, its governance structure has evolved over time. It is the multi-stakeholder model of governance, where governments, industry, technical experts and civil society manage the internet. The broad-based, participatory approach involving all stakeholders is seen by many to be best suited to ensure an efficient and unrestricted global flow of information essential for economic development.

While we are realising the increasing dominance of these global platforms, connected with these is the privacy of the individual user and security of the state, which are often dependent on the mercy of these platforms. In a way, these platforms have the manipulative power and wherewithal to manage the users.

Therefore, the change is here to stay. No more is it a generic governance that will rule the State, rather internet users will make the way for trans-border netizens who will be governed by global platforms.

Thus, with these new rules of the game of Internetography, global platforms are going to pose a major challenge to the nation states, in terms of governance and providing of all kinds of services and facilities, thereby posing a question mark on the existing world order itself.