The crisis in the IT industry ends. In 2010 the Polish IT market is expected to grow by more than 3% to approx. PLN 25bn, while a year later it may see two-digit growth rate. IT providers are more and more optimistic about the future of their market, whose growth, as they expect, will be driven by the improved macroeconomic factors and higher demand from corporations. 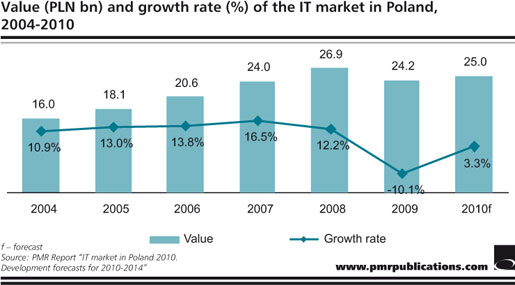 According to data gathered by the research company PMR, the value of the IT market in Poland stood at PLN 24.2bn in 2009, having gone down by 10.1%. In H1 2009, it was forecast to fall by 8%. Overall, PMR expected the market to be worth PLN 0.5bn more in nominal terms. The hardware sector shrank by one-fifth, as expected. The significant decrease in the sector of PCs and display units in 2008 was sharpened by the breakdown in the sector of portable computers in 2009. The reduced demand, especially in H1 2009, was accompanied by rising prices of imported hardware, which resulted from the unfavourable dollar exchange rate. Noteworthy, such a breakdown had never happened on the Polish IT market before. Periods of stagnation did occur occasionally, but the value of the market never went down.

As for the market structure, IT spending by private households and small and medium-sized businesses is steadily growing, and the tendency is reinforced by the crisis. However, large corporations are still the major customers, as their IT expenditure is of primary importance for the IT sector in Poland.

As in previous years, this year’s edition of our survey carried out in May and June among the managerial staff of the 200 largest IT companies featured questions about changes on the IT market. Last year most respondents said that the Polish IT market shrank, while in 2010 impressive 83% expect it to grow by 7% on average (13% in 2011). Such responses indicate that the crisis in the industry is coming to a close and, even though the effects of the economic slowdown are still easy to feel, respondents are optimistic about the coming years. The most conservative opinions about the future of the IT market are still voiced by hardware distributors, even though in H1 2010 they clearly improved their sales performance. 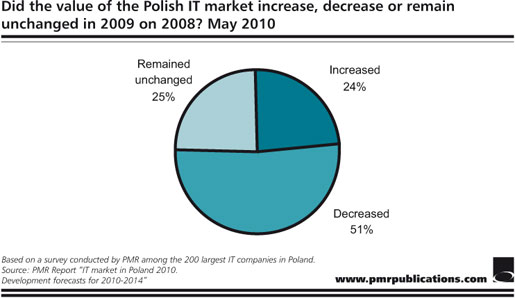 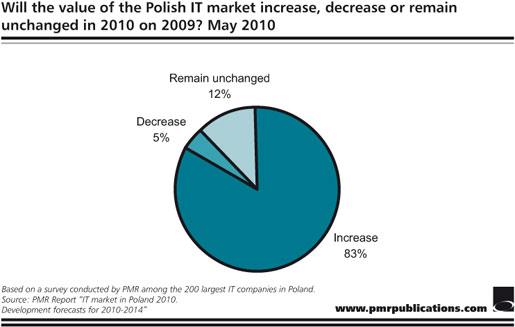 The standing of the Polish IT market does not differ much from the global trends. As in other countries, 2009 was a period when the market slowed down and the forecasts for 2010 are moderately positive. The main impulse for recovery is expected from the public administration and financial sectors. Still, it should be remembered that the Polish IT market is relatively strong compared to other Central European countries. “We have relatively high stability and small fluctuations between the reductions recorded in 2009 and the growth rates forecast for 2010. To compare, we estimate that the Russian IT market went down by 25% in 2009 and will grow by 7% in 2010”, comments Pawel Olszynka, PMR analyst and co-author of the latest report on the IT market in Poland.

As the economic crisis is about to end and the Polish economy is recovering, the IT industry is expected to post positive results for 2010. Based on the year-end figures and opinions on the situation in the market after the first two quarters of 2010, we forecast that the IT market in Poland will grow by 3.3% in the entire 2010. However, it must be noted that, because of the significant reduction in 2009, our forecasts are more conservative than the expectations of the largest IT firms.

PMR also forecasts that hardware, which was the segment most severely hit by the crisis, will be the segment most actively recouping the losses in 2010 and 2011. Business customers, who used to put off purchasing of new hardware, will more eagerly buy new computer products now. Thus, a situation rather rarely seen will arise – in these two years hardware will grow at the relatively highest pace, compared to software and IT services. However, during the next 3-4 years the segments of IT services and software will most likely outperform hardware, which will slow down after the two years of stronger growth. The slowdown will be caused by the fact that households will become saturated with computer hardware and by the growing price pressure – these factors will contribute to weaker sales results in value terms, despite higher sales volumes.

To sum up, given the macroeconomic performance, which is better than expected, there are no grounds to announce stagnation on the Polish IT market. The most likely scenario for the coming years assumes that the market will gradually (2010-2011) achieve two-digit growth rate again (2012-2014). The IT market may also grow faster than we forecast, so it will more effectively make up for the losses suffered in the downturn. The growth may be driven by the likely increase in sales of new computers, more new projects implementations and the purchase of new hardware by large and medium-sized businesses.

Findings from the survey among 200 largest IT companies 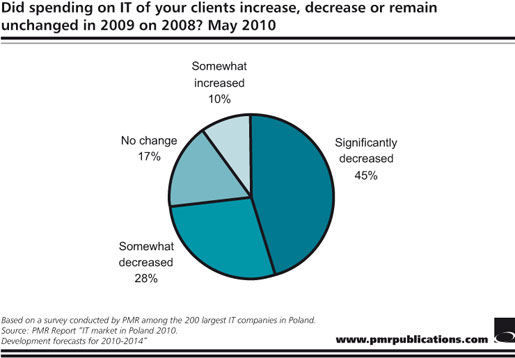 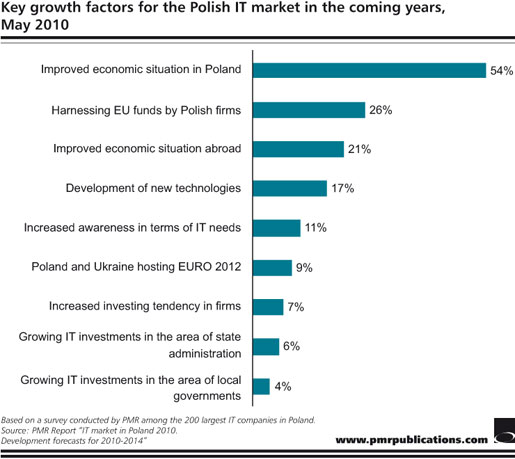 We also asked about the main drivers of growth in the IT industry. The largest IT companies in Poland still believe that the strongest stimuli for growth of the Polish IT industry are improving economic situation in Poland and the world and the EU funds earmarked for IT projects. It ought to be noted though, that the proportion of respondents who pointed to these factors slightly fell compared with the previous year. On the other hand, more respondents (3 p.p. more, relative to the previous edition of the survey) mentioned the development of new technologies and services (e.g. virtualisation) as a major growth driver. 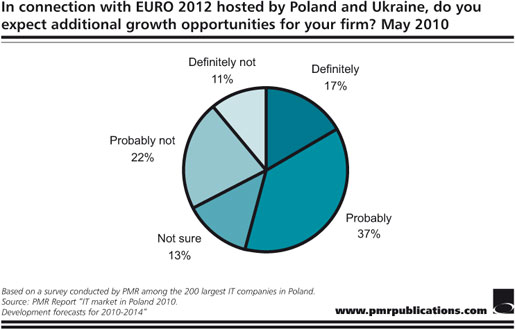 The fact that Poland will co-host (together with Ukraine) EURO 2012 made us ask the respondents about the growth opportunities arising from the preparations to this event. The survey showed that the respondents are more optimistic about that than in previous years – more than a half (54%) see EURO 2012 as an additional factor stimulating growth of the Polish IT industry (that is 10 p.p. more than in 2009 and 3 p.p. more than in 2008).

This press release is based on information contained in the PMR report entitled “IT market in Poland 2010. Development forecasts for 2010-2014”

You are welcome to contact the coordinator of the report:
Pawel Olszynka, Head IT&Telecoms Analyst
tel. /48/ 12 618 90 61
e-mail: pawel.olszynka@pmrpublications.com

PMR Publications (www.pmrpublications.com) is a division of PMR, a company providing market information, advice and services to international businesses interested in Central and Eastern European countries and other emerging markets. PMR key areas of operation include market research (through PMR Research), consultancy (through PMR Consulting) and business publications (through PMR Publications). Being present on the market since 1995, employing highly skilled staff, offering high international standards in projects and publications and providing one of most frequently visited websites, PMR is one of the largest companies of its type in the region.