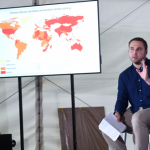 The Latvian startup Toneboard in co-operation with Re:Baltica, the Baltic analytical journalism center, have announced that they will be receiving financing from the Google-backed “Digital News Initiative” fund to develop their factpchecking platform, 4Facts.org.

The joint Toneboard and Re:Baltica project will receive 50,000eur to develop a prototype. “Currenty we’ve thought of the concept. The technical schetch of the prototpye is done, and what it’ll look like is substantially described. The first potential “fact checkers” have been approached. We have funding for the prototype, meaning we can build something very small and demonstrate that it’s capable of functioning. We’re going to build the prototype and we’ll analyze if it can work. By prototype, in this case, we understand not only the technical solution, but also the usability criteria and volume capacity when it comes to fact-checking.” says Martins Vaivars, CEO of Toneboard (pictured).