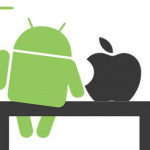 Android has grown in most markets with “increased demand for lower-cost” devices, while iPhone SE sales are “strong” in the UK.

“against a particularly high share for the iPhone 6 a year ago, the latest three months to August 2016 show Apple share of smartphone purchasing down significantly by 5% to 32.6%, with the iPhone 6s falling to 2nd place, followed closely by the iPhone 5s, the volume of which has grown considerably and the SE maintaining its 5th place, similar to last month. Samsung’s Galaxy S7 regains its No.1 position as the best-selling model this period.”

In contrast to iOS, Timpson continued, “Android has enjoyed a share increase of nearly 10% up to 62.5%.

“Whilst the more established global brands as a group account for an increase of 2.9% (led largely by Sony and HTC), the less established Android brands boast a greater contribution to the growth of this platform, with significant increases seen for Oppo, ZTE, Huawei, Alcatel and Telstra.

These five brands account for 11.5% of smartphone purchasing in the last three months, with volume growing by 130%.

As Apple and Samsung continue to dominate the premium end of the market, not surprisingly, these other brands have generally entered the market at the low end and are now seeing their average prices increase by 129% overall to US$238, paving the way for positioning themselves as attractive alternative options in the low-middle tier up to US$400, where their collective share grows to 25%.”

But what about the rest of the world?

The research and analytical gurus say that “market share for both Android and iOS grew” in the top five EU markets of the UK, Germany, France, Italy and Spain, “representing 78.1% and 17.3% of smartphone sales, respectively”.

The US has thrown up some interesting figures, as has China with “iOS increasing 2.5 percentage points to 30.9%, but declining in urban China, falling to 13.5% of smartphone sales”.

Meanwhile, Android dropped 1.7% in the US. In the US, Kantar says “Android accounted for 65.2% of smartphone sales, a decline from 66.9% in the same period a year ago”.

Android’s three largest manufacturing brands in the US — Samsung, LG, and Motorola — all posted year-on-year sales declines, with Samsung continuing as the top manufacturer in the region at 33.9% of smartphone sales.

“Alcatel and ZTE, sold primarily through prepaid channels such as Walmart and Boost Mobile, each captured 3.5%, gaining an average of two percentage points in US market share over the past year. That growth, however, was not enough to offset the decline experienced by other Android brands.”

“In the UK, both Android and iOS continued to enjoy year-on-year gains, with the iPhone SE remaining the top smartphone sold in the region in the three months ending August 2016.

In Germany, eight out of every ten smartphones sold was Android-based. Samsung remains the top brand at 46%, although that number represents a decline of 3.6 percentage points, compared to the August period a year ago. The Samsung Galaxy S7 was the top-selling device, with a starting price of €620, closely followed by the Samsung Galaxy A5 and A3, two lower-cost alternatives to Samsung’s flagship device.”

“The US, British and German markets have a couple of things in common. First, the Google Pixel, announced on 4 October, will be available through select retail partners in these markets beginning in mid-October.

Second, the combined sales shares of Samsung and Apple represent more than 60% of all smartphones sold in these regions, with the rest scattered among brands in decline, such as Motorola and Sony, and those in growth, like Huawei and Alcatel.

The US and Britain have always been considered premium markets, but we are starting to see a shift to lower-cost devices as the prices of flagship products reach upwards of $800.

For Google, this represents a unique challenge, as consumers weigh the features of the Pixel against those of other similarly priced products like the iPhone 7 and Galaxy S7, and against ‘good value for money’ Android-based brands that many consumers have started to view as alternatives.”

“In urban China, iOS accounted for 13.5% of smartphone sales in the three months ending August 2016, the lowest share for iOS since before the launch of the iPhone 6 and 6 Plus in July 2014.

Android accounted for nearly nine out of every ten smartphones sold, with Huawei and Xiaomi remaining the top two brands in the region. Oppo, close on Apple’s heels, accounted for 10.6% of sales, with the Oppo R9 becoming the second best-selling phone in the region at 4%, behind the iPhone 6s at 4.3%.”

“We believe that Apple’s share in urban China will bounce back, as the iPhone 7 and 7 Plus become widely available.

Our September 2016 data is expected to show that initial iPhone 7 sales, plus a boost from the lower-priced iPhone 6s and 6s Plus, will begin to reverse iOS share decline that began in February. However, with Huawei continuously breaking its own record for the highest share in China — currently 30% of smartphone sales — there is no guarantee that Apple will return to the number one position in that market.” 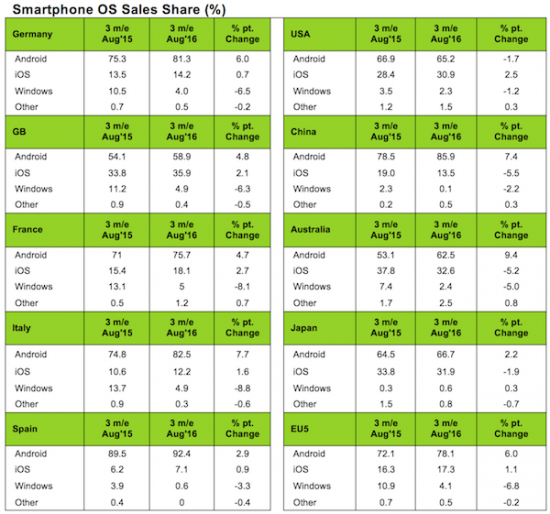