The Hottest Frontiers For Mobile App Development In 2015: Shopping, Productivity and Messaging 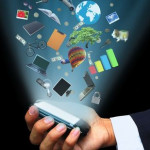 Mobile gadgets have already become an  indispensable part of our everyday life, as we are using them more and more not only for communication, but also for working and shopping.

During the past few years we witnessed an enormous growth in entertainment, particularly in games, but since 2014 there has been increasing interest in “serious business” apps.

Such impressive advancement assures us that these three categories will be the hottest frontiers for apps development in 2015, as they represent users’ needs today.

It is noteworthy that the time spent using apps significantly grew in all app categories in 2014. While 2013 was the year of social and messaging apps, 2014 was the year retail took off.

The overall growth rate of other categories slowed last year. Growth in Games has slowed from 61% in 2013 to 30% in 2014. The same is true for Music, Media, and Entertainment: the growth rate has been reduced to 33% from 79% in 2014. These figures show us new trends in mobile app usage: consumers are increasingly moving from entertainment apps to apps that assist in daily tasks.

Flurry Analytics accomplished some interesting research about shopping apps usage that we consider important to mention here. It allows us to take a deeper look at where and when people are using shopping apps. Based on a sample of Android devices in the US, they were able to plot engagement with Shopping apps by zip code. They distinguished between the zip code of “Home” and that of “Away” by looking at the zip code where the most activity appeared in the period between 11 p.m. and 5 a.m. Activity outside of this zip code they labeled “Away.”

Based on this analysis, the most active times for mobile shopping are the commute period of 9 a.m., lunchtime at noon, and prime time at 8 p.m. However, there are always some shopaholics that use shopping apps all night long! These new behavior patterns reveal excellent opportunities and challenges for retailers. It is necessary to adjust to the modern reality of a multitude of shops in every consumer’s pocket 24/7.

It is true that smartphones, tablets and even wearables have become an essential part of our work routine and everyday life. Taking into consideration the nature of the way people work today, it is clear that productivity should be mobile. The greatest Utility & Productivity apps are designed to make your overloaded schedules more organized, and your hectic life a bit easier, and even more delightful: from apps that transform budgeting into something really beautiful and enjoyable to ones that inform you about the exact time when it’s going to rain.

That is why users discovered more helpful Utilities & Productivity apps in 2014. An increase in this app store category last year confirms that users are increasingly getting more comfortable performing specific tasks from their tiny gadgets.

This trend was particularly influenced by the introduction of Microsoft Office for mobile that took place last year. The Microsoft Office app is available not only on Windows devices, but also on Android and iOS. Not long ago, Microsoft also acquired the email startup Acompli, confirming its commitment to the mobile apps industry.

It seems that messaging is gradually eclipsing email as the standard way of communication. It is the most appropriate way to interact with each other instantly and perfectly suits such new devices as wearables and different voice-controlled interfaces. Simple interfaces and user-friendly messaging systems are accessible to people all around the world.

Messaging was the key driver of mobile growth, propelling overall app use to 115% in 2013. Last year it also posted triple digit growth, as messaging apps were used not just for messaging itself. They are exposed as platforms for other services such as payments (SnapChat and Japan’s LINE) or games distribution (TenCent’s WeChat). By all appearances, these Asian messaging giants will find their way into the US market this year.

Messaging apps are more than just free instant communication tools. They are driving the boom not only because of messaging. Like social networks a short time ago, these apps are becoming the keys for whatever global users do on their gadgets. Messaging apps help us immediately connect with one another, video chat, share images, and finally be involved in such activities as playing games and shopping – something that helps to earn serious revenue for the apps.

Certainly, there are always some unfilled gaps even in such popular app store categories as shopping, productivity and messaging. It means you still have a lot of opportunities to polish the existing apps or develop some new ones. Users will be grateful for mobile apps that could be the best possible personal assistants in their daily lives.

If you made it this far, thanks for reading! Please let us know your thought and ideas below, and we’ll do our best to respond instantly and keep the conversation moving forward.