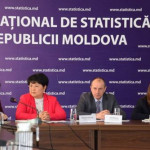 Thus, by one click, users can find out the wages of women compared to men in different sectors of economy and their development over the time or the health condition of women and men in cities and villages, or the ratio of gender in decision making bodies and more.

GenderPulse was set up in cooperation with the National Statistics Bureau supported by the UNDP and UN Women.

The indicators included in Gender Pulse are synchronized with the Bank of statistics StatBank that meets data collected from different institutions and validated by the National Statistics Bureau.

Such data allow to understand the role of women and men in society, the activities they hold, ways of interaction of women and men, differences in access and use of resources, potential and opportunities available to them.

“It is needed reliable and understandable data for the member states of the United Nations to meet sustainable development goals. GenderPulse illustrates a clearer portrait of inequalities between men and women, inequalities that would remain unnoticed. It is the first attempt to make data accessible and understandable not only by decision makers but also by any person”,

Data viewed on GenderPulse are grouped into 5 thematic areas relevant to the analysis of gender issues: demography, participation in decision-making, education, health and economic empowerment.

Most graphics on GenderPulse are accompanied by short and comprehensible texts aimed to explain meaning of statistical indicator, to show gender differences or to describe time evolution of the phenomena measured by statistics.

In July 2016, UN Moldova launched statistical profiles of 10 groups of girls and women in Moldova.