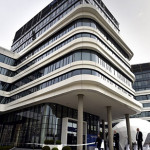 Futureal Group and Nokia have opened Nokia Skypark office building in Budapest, Hungary. In the latest member of Corvin Promenade, one of Hungary’s largest IT and telecommunications R&D centres has started its operation. Over 2000 employees of the Nokia Networks Global Technological Centre, located in Skypark, collaborate on future solutions.

Nokia Skypark, developed by Futureal Group, boasts the latest technology since it is planned to meet the needs of technology and R&D. The office complex with an investment value of over EUR 70 million is entirely occupied by Nokia. The company’s experts are working on a number of products that contribute to the paradigm shift in the telecommunications industry. One of them is Telco Cloud (cloud-based telecommunications system), that helps mobile service providers remedy the issues arising from increased performance demand with automatic mechanical solutions – for example on New Year’s Eve or at a festival. Moreover, Nokia Bell Labs research centre is working on developments which determine the digital life span over a 10-year horizon.

The building based on innovative solutions, was designed by the internationally recognised, FIABCI audience award winner Zoboki-Demeter and Associates Architects. Nokia Skypark, with 25,000 square meters of GLA, has a 2-storey lobby and a conference center on the first floor. Facilitating efficient, creative work had high priority, when planning the interior design. On the ground floor, restaurants, cafés and a kindergarten provide additional comfort for Nokia’s employees.

“Since the start of the financial crisis, Skypark has been one of the most significant rental transactions in the Hungarian office market. Corvin Promenade’s magnificent building has merged the highest level of architectural and IT knowledge that also contributes to the already existing scientific research work at Corvin Quarter,” 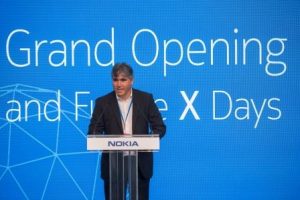 In 2015, the construction of the astern closing block of Corvin Promenade project was started with the development of Skypark. An urban space was designed to the entrance of the office building with seating surfaces, where 10-meters high plane trees have been planted as well. The development of the area around the new office complex features a walkway section designed by the landscape architect, Anikó Andor. Around Nokia Skypark, nearly 100 shops, restaurants, cafés, a fitness-wellness center, laundry, post office, bank branches and a cinema can be found.

“A revolution is taking place in the world: the 4th Industrial Revolution. And even in these moments, there are a couple of revolutionaries working in the office building next to us.  I am proud that we had the opportunity to create a worthy environment for our colleagues where they can focus on solving problems of the future,” 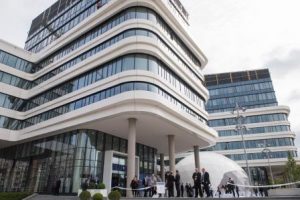 Corvin Promenade is an internationally recognised and awarded development project that won the International Property Award Best Mixed Use Development Europe award as well as the property development award of the Hungarian Chapter of FIABCI. In 2014, this development was the first Hungarian one to receive the Urban Land Institute Global Awards for Excellence, which is considered to be the Oscars of city and real estate development industry.

Foreign minister was open the ceremony

According to MTI, the Nokia Skypark office building, which is to house a new state-of-the-art IT and R+D centre, was opened by Péter Szijjártó, the minister of foreign affairs and trade, in Budapest’s rehabilitated Corvin Quarter on Tuesday.

Nokia Solutions and Network Kft has signed a ten-year lease on the 20 billion forint (EUR 64m) building in the eighth district with developer Futureal.

Hungarian IT developers and engineers working on major developments around the world will have access to the best possible environment in which to continue notching up important results in world-class developments, he said. Nokia is expanding globally, with revenues growing by 89 percent last year, he added.

Szijjártó underlined Hungary’s aim of offering the most favourable conditions in central Europe for companies engaged in R+D that forms the basis for new technological investments. The government has created a favourable tax, training and digital conditions accordingly, he said.

According to MTI, the minister noted that the production value of Hungary’s IT industry came to 3,101 billion forints (EUR 9.97bn) last year, up 4 percent from the previous year. At the same time, the sector employed 201,000 people in Hungary, up 14 percent on 2015, he added. 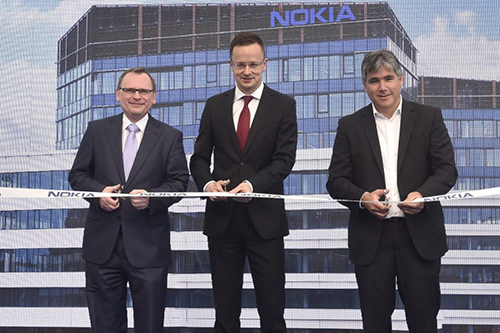 Nokia Solutions and Networks employs about 2,100 people in Hungary. About 2,000 of them work at Nokia Skypark.