OpenStack by the numbers: Who’s using open source clouds and for what? 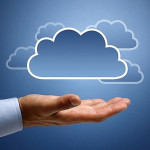 IT vendors and telecos are the heaviest users of the open source cloud software, bi-annual survey data shows.

The latest bi-annual survey data of OpenStack users shows a continuing march of the open source cloud software into mainstream of enterprises, but also the project’s continued challenges related to ease of deployment and management.

One thing that’s clear is that interest in OpenStack continues to grow rapidly. The project is made up of 20 million lines of code; more than 585 companies have supported OpenStack in some way, and the OpenStack Foundation counts almost 40,000 people actively engaged in the community. 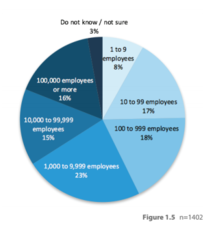 OpenStack has a healthy distribution of both large and small organizations. Twenty-three percent of respondents work for a company with between 1,000 and 9,999 employees, while 18 percent work at a business with fewer than 1,000.

Which industries use OpenStack?

Businesses in many sectors use OpenStack but it’s clear that a couple of core industries stand out. Sixty-eight percent of respondents work for Information Technology companies; 14 percent for telecommunications providers and 9 percent for academic institutions. 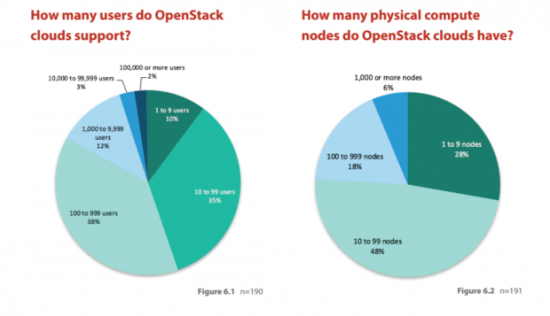 In what stage of deployment are OpenStack clouds?

What types of clouds use OpenStack?

One emerging use case is a hosted private cloud: 12 percent of respondents contract a service provider to host a dedicated OpenStack deployment, freeing customers from having to manage the complexity.

Perhaps unsurprisingly, the fact that OpenStack is open source is a key driver for its use. But interestingly, 66 percent of respondents said the primary reason they chose to use OpenStack was to save money over alternative infrastructure costs. Ninety-seven percent said standardizing on open APIs was at least one of the their top five reasons.

The Foundation asked its members what they most like and dislike about using OpenStack. Aspects related to the project being open source are key benefits for users, but increasing its ease of use and management is a top priority.

Which other clouds does OpenStack connect to? 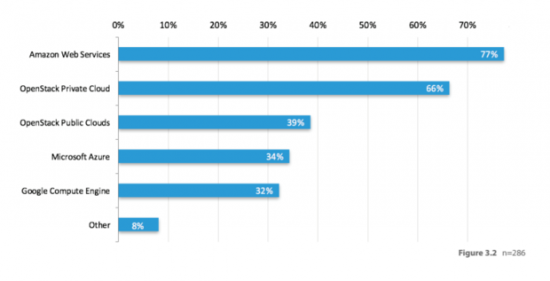 The relationship between OpenStack and Amazon Web Services has been somewhat tenuous. But the survey shows that OpenStack users commonly integrate AWS and OpenStack.

For example a whopping 93 percent of OpenStack clouds run the Kernel Virtual Machine hypervisor. The next most popular hypervisor is QEMU with 16 percent use. Despite VMware’s efforts to assimilate its tools into the OpenStack ecosystem, only 8 percent of users reported ESX as their hypervisor.

On the networking front, the most popular network driver is Open vSwitch, while for storage Ceph is the dominant platform. MySQL is the top database, followed closely by MariaDB and MongoDB – all of which are open source. 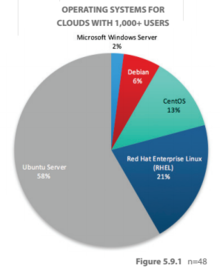 Again in the operating system open source dominates the majority (74 percent) of OpenStack clouds. What may be surprising here is Ubuntu’s commanding lead over Red Hat, SUSE and CentOS.

While it’s unsurprising that users of an open source cloud infrastructure would also use open source components elsewhere in the stack, it highlights the challenges traditional vendors have in monetizing support of OpenStack clouds.

What’s next for OpenStack?

At the Austin Summit one of the key themes is expected to be the integration of OpenStack with higher-level orchestration and platform as a service (PaaS) tools. This is important because while OpenStack IaaS provides capabilities for automation of infrastructure, higher level services give developers the tools they need to write, manage and deploy code on that infrastructure quickly. 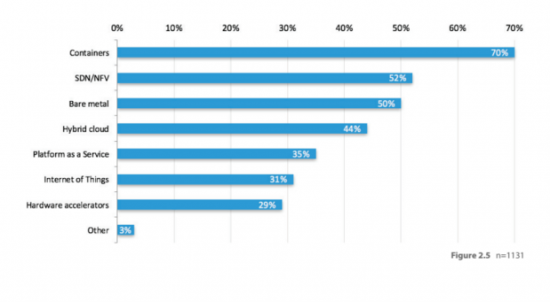 Finally, the Foundation attempted to pin down who within an organization is managing OpenStack clouds and the answer shows how cloud computing is ushering in a new wave of jobs. The most popular job title of a respondent to the OpenStack survey was a “cloud architect,” a title did not exist 10 years ago.