It is no surprise to learn from the gurus at Gartner that India, as undisputed champ, and China, as greatest challenger, remain the leaders for offshore IT and business process outsourcing services.

Still no surprise that many other countries such as Malaysia, Poland, and Chile are investing heavily to become credible alternatives. But it says much about how global IT outsourcing has changed that Gartner claims the destinations now just outside the IT offshoring club are Pakistan and North Korea. In his latest book, Obama’s Wars, legendary investigative journalist Bob Woodward describes Pakistan as the most dangerous country in the world. And North Korea?

In its report 10 Leading Locations for Offshore Services in Asia Pacific and Japan for 2010, Gartner analysed countries as offshore services locations using criteria such as language, infrastructure, education, cost, cultural compatibility, legal maturity, and security. All the countries on the Asia-Pacific list, including Australia and New Zealand, make Gartner’s global top 30 offshore locations for 2010.

India continues to grow its IT services exports, but its share of the worldwide total has declined, and wage pressures, geopolitical troubles and financial scandals are creating opportunities for other countries.

Meanwhile, currency fluctuations against the US dollar have made some countries less compelling. As the Australian dollar hovers close to parity with the greenback, for example, Australian demand for offshore services should increase. But it will also make Australia less attractive as an outsourcing destination.

Management consultants AT Kearney rank the most attractive offshoring destinations for many business activities — IT services and support, contact centres, and back-office functions — in an ongoing research project called the Global Services Location Index, or GSLI.

The firm’s latest GSLI reveals a dramatic shift in the geography of outsourcing destinations, due to diminishing cost advantages in some countries, and improved skills in others.

The Middle East and North Africa is emerging as a major offshoring region because of its large, well-educated population and its proximity to Europe. Countries in Latin America and the Caribbean continue to capitalise on their closeness to the United States as nearshore destinations. There are also onshoring trends to lower cost cities within the US, UK, France and Germany — big western democracies facing political pressure to keep jobs at home.

Thanks to emerging technologies such as cloud computing, service providers are offering more outcome-based pricing. While clients believe pricing for infrastructure services is competitive in the early years of an agreement, adjustments over the life of a contract struggle to keep pace with the market. More CIOs are looking to ensure competitive pricing for the life of their agreements.

CIOs are also seeking more vertical expertise from outsourcers. Service providers, traditionally hired to improve efficiency and reduce costs, are being asked to also identify and solve inefficiencies in clients’ internal environments. Clients are leaving the bulk of their original scope with incumbent outsourcers, but they are carving out some portions and awarding them to other providers in a multi-sourcing, best-of-breed approach. 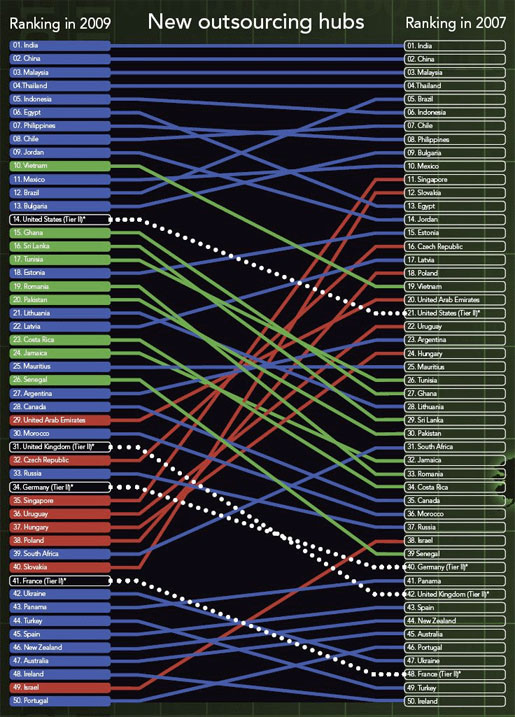 The AT Kearney Global Services Location Index. The GSLI analyses and ranks the top 50 countries worldwide to determine the best destinations for providing outsourcing activities, including IT services and support, contact centres, and back-office functions. Each country’s rank is composed of a weighted combination of relative scores on 43 measurements, which are grouped into three categories: Financial attractiveness, people skills and availability, and business environment.