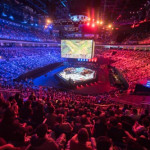 A couple of months ago, we received a challenging task from our partnership company Tagvance Media. The objective was to implement reliable live streaming of a well-known eSports event. The solution had to:

A Point Grey® Ladybug®3 unit had already been chosen as the main HQ 360 camera for the purpose.

Ladybug®3 is a popular camera, widely used within the 360 VR space. It’s a 15 FPS device that allows streaming 12 MP resolution images to disk in JPEG format.

The project’s objective was to create a custom streaming solution that would provide extra flexibility in capabilities and configurations for a range of applications, and would also work flawlessly in unforeseen situations.

The process of live streaming for a multilense camera includes the following steps:

The resulting live streaming solution involves two servers, as illustrated on the diagram below:

Our solution demonstrated great stability during 8 hours of non-stop live streaming in a test environment.

The cost of the solution’s hardware was extremely low (it’s just a couple of regular i7 PCs that could be reused later when the camera gets old).

Best of all, the solution proved its excellent efficiency in the real live event it was initially designed for — during the live streaming of the League of Legends Turkish Champions League Finals on August 13, 2016.

For future events, Tagvance plans to include more 360 cameras across the venue to enhance the immersive presence for the audience.

The League of Legends Turkish Champions League Finals were hosted at Ülker Sports Arena in Istanbul in front of a 10,000+ audience, with the event being streamed live on YouTube all over the globe.

With the incredible cosplayers, the blasting opening act, the action-packed clash between Turkey’s strongest teams, and the winners award ceremony, the event was definitely a highlight in the cybersports world of 2016.

But the gem in the event’s crown was its live streaming process, which helped to make the number of watchers many times as large. As of now, the 3-and-a-half-hour-long broadcast has been watched over 40,000 times, making it one of the longest and most popular 360 VR live videos ever published on YouTube.