Top programming languages to learn in 2019? Developers name their favorites 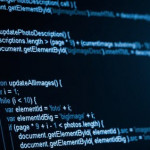 Developers are most keen over the coming year to learn open-source Python, Microsoft-backed TypeScript, Google-hatched Go, and the go-to language for creating Android apps, Kotlin.

The findings come from a survey by developer marketplace HackerRank, which asked 71,000 developers around the world about what languages they know today and what they want to learn this year. The results are released in its 2019 Developer Skills Report.

Go, created in 2007 at Google, is the top language that developers say they want to learn in 2019, followed by Kotlin, Python, and TypeScript. Other languages that are high on developers’ agenda for the next year include R, Swift, and Scala.

HackerRank found that developer interest in TypeScript spiked in the past year. The language was developed by Microsoft and debuted in 2012 as the company’s answer to scaling up JavaScript for large applications built by large teams of developers.

HackerRank believes TypeScript’s rising popularity is likely due to widespread knowledge of JavaScript and that many JavaScript frameworks use TypeScript. The language was known by just under a quarter of all developers in 2018 compared with 15 percent last year. 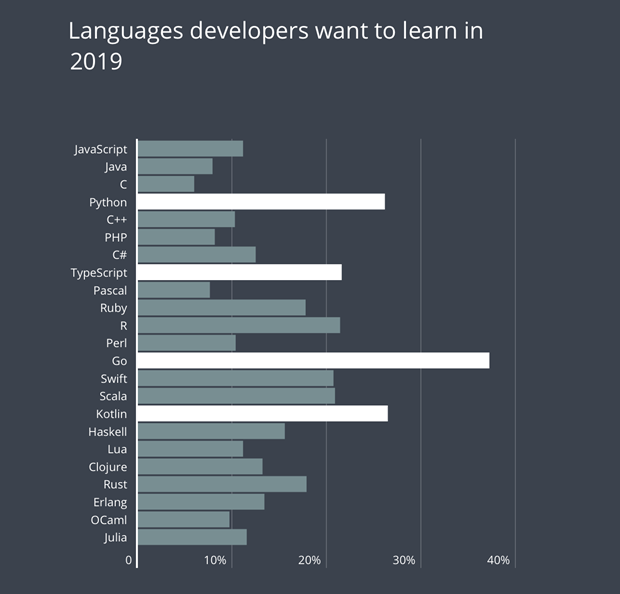 TypeScript ranks eighth on HackerRank’s list of most popular languages in 2018. The ranking is based on what languages developers report they understand.

The top language in 2018 was JavaScript, which was understood by 73 percent of developers. The remaining top 10 include Java, C, Python, C++, PHP, C#, TypeScript, Pascal, and Ruby.

Despite widespread knowledge of JavaScript, which is commonly used to build web applications, HackerRank’s earlier study of student developers found that just 42 percent in this group knew the language, probably because it isn’t frequently taught in computer-science programs. Developers therefore tend to learn it on the job.

While JavaScript rules HackerRank’s list of top programming languages, Python took out the top place in the Tiobe index for 2018. Unlike JavaScript, Python is widely taught in universities, and is also popular for machine learning, scripting, web programming, and scientific computing.

Usage of Kotlin, an alternative to Java, has also skyrocketed over the past two years after Google made it an officially supported language for developing Android apps. Microsoft-owned GitHub found that it was the fastest-growing language on the code hosting site.