Programming Languages Ranking as of January 2017 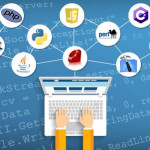 The largest online community of Ukrainian geeks, DOU has just published interim results of their ongoing programming languages survey and this is my English translation of its main takeaways and results as of January 2017. The survey was comprised of over 8,100 respondents, and 90% of the participants currently reside and work in Ukraine.

According to the survey, Java remains the most commonly used language and currently holds 23% of the Ukrainian developer mindshare. JavaScript ranks #2 with 16% market share, followed by C# (15%) and PHP (13%). There’s a big gap between PHP and Python that is currently used by only 7% of the Ukrainian developers polled. C++ programming holds 5% of the developer mindshare, followed by Ruby (4.5%), Swift and Objective-C. Scala is at the bottom of the Top 10 list with only 1.5% of developers using it on their projects today.

Figure 1: What language are you using on your current project?

Compared to the previous years, Java is slightly decreasing in popularity, although it still remains the most widely used one in Ukraine. JavaScript is gaining traction. Swift continues to supersede Objective-C: today, Swift/Objective-C proportion is 55/45, while it made 20/80 last year. PHP is more or less stable, while Scala and Go become more frequently used, compared to 2016.

Speaking about preferred technologies, the picture is almost the same, except that Go, Kotlin and TypeScript demonstrate high attractiveness for programmers. When asked about what language they’d choose to use on the project if they were decision makers, fewer developers pointed to Java, compared to the past years.

Figure 3: What language would you choose on your project if you could make such a decision?

We can hypothesize that Kotlin is a preferred language for those developers that have already faced particular Java limitations.

Now let’s review Ukrainian developers’ satisfaction index by their willingness to use the same language for their next project. 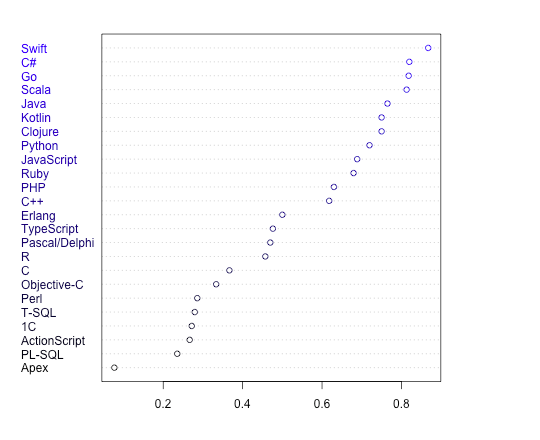 As we can see from the above image, Swift is the most favorite language, followed by C#, Go and Scala. Apex and other SQL and archaic languages are least favorite among Ukrainian software engineers.

Speaking about learning new languages, 65% of developers surveyed said they were going to learn at least one new language in 2017. Now let’s see which one tops the list.

Thirty-one percent of the survey participants haven’t decided on the language yet, while 12% said they’d learn JavaScript.

Now let’s see if there’s anything interesting as far as programming language and developer’s age. And there is indeed!

Figure 6: Dependency between a chosen language and developer’s age

Millennials (median age: 24 years old) choose Kotlin, while 27 year old developers program in Java, JavaScript, Python, Ruby and Swift. Those aged 35 and above program mostly in PL/SQL, Perl, Pascal and 1C which is quite evident. Also, the average R developer has become younger due to the fact that more young developers are rushing to learn data science nowadays.

Figure 7: Dependency between a chosen language and developer’s experience