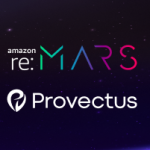 It has been three years since the last MARS conference in 2019, but Las Vegas has not changed: it is baking hot outside, casinos beckon you from every sidewalk, and tech folks from all over the world are talking about AI, robots, and space.

Provectus is proud to have participated in Amazon re:MARS 2022. As a gold sponsor, the company brought the heat — their best tech minds — to the event, to deliver a joint breakout session with PepsiCo. The team proudly won second place in AWS DeepRacer, entertained guests at their booth with a funny and smart computer vision demo, and most importantly, explored the horizons of Machine learning, Automation, Robotics, and Space.

Amazon re:MARS is not just a conference, it is an experience. Walking through the expo halls, you may encounter a prototype of Blue Origin’s latest space capsule, interact with all types of robots and intelligent machines, and view exhibits of drones and other airborne devices.

The Provectus team had its own booth, and they did their best to add to the fun! 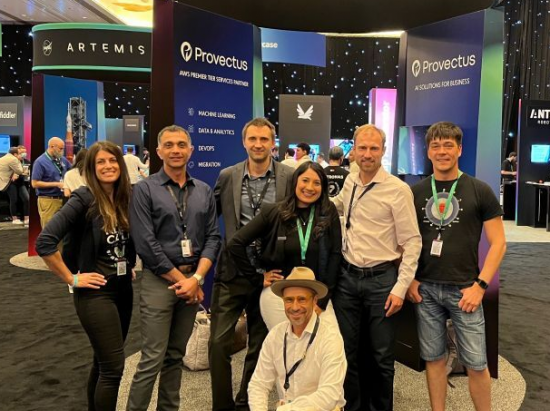 Every attendee could take part in their simple but entertaining Computer Vision demo. Booth visitors could take a photo of their face and have it processed by the ML model to animate it in fun ways – adding Einstein hair, going bald, elongating features, and more. Long story short, anyone could play with the settings to create a fun, AI-generated photo.

The team of Provectus also had a couple of quizzes and contests at the booth, and the winners received valuable prizes from them. For example, one winner of their tech quiz got a programmable AI/Ml-powered robot — he was extra excited about that!

Provectus did more than man the booth, though. They hosted an AWSome Happy Hour for our clients and partners at Top Golf. The company’s sales manager Tera Tarbet won a virtual run for Obliteride and got to meet such AWS stars as Jeff Barr. Their brainiacs, Rinat Gareev and Leonid Blokhin, competed in the AWS DeepRacer League and came in second place after the NASA team.

Overall, Amazon re:MARS 2022 did not disappoint. There were three inspiring keynotes, multiple thought-provoking leadership and breakout sessions, and tons of networking with the world’s greatest minds, like Michio Kaku.

Provectus did not disappoint either. Together with PepsiCo’s eCommerce Retail Data Engineering Lead Russell Lamb, Provectus’s Cofounder, CEO/CTO Stepan Pushkarev delivered a breakout session on the data and ML business transformation undertaken by PepsiCo with the help of Provectus.

The Future Is on the Horizon

Provectus participated in one of the first re:MARS conferences back in 2019. Since then, many of the innovations that were unveiled there have become a reality. AI/ML technology as a whole has made a giant leap forward. Robots have become smarter and much more autonomous. Self-driving cars are a part of everyday life, and the concept of mass-scale space travel is no longer limited to sci-fi books and movies.

Provectus is excited to be a part of the movement towards a technology-driven future. The company believes that AI holds massive potential to make our world a better place to live and thrive for every human.