Rating of the Largest IT Companies in Russia: Market Continues to Consolidate

The Digit.ru High Tech Information Portal and the RIA Analytics Center for Economic Research have presented the ‘Top 30 Largest IT Companies in Russia’ rating of 2011.

The purpose of the rating is to identify current IT industry trends and prospects, create an unbiased and balanced landscape of key market players and pinpoint market leaders.

According to the Ministry of Communications and Mass Media, in 2011 the Russian IT market totaled RUB 649 billion, representing a 14.6% increase. In 2010, the value of the IT market reached RUB 566 billion (a 14% increase). In 2011 the IT market surpassed pre-crisis indicators. As in 2010, the largest customer for IT solutions and services was the government sector.

According to research, the IT industry continues to follow the trends of 2010 with leading companies increasing their market shares and recording faster turnover growth than the IT industry in general. Industry leaders increased their revenues by an average of 27%. Three regional companies were among the Top 30 in 2011 (two from St. Petersburg and one from Kazan), compared with only one non-Moscow company in 2010. It is certainly premature to speak of pressure from regional players on the Moscow companies. However, the domination of Moscow-based players is slowly beginning to decrease as regional companies begin to join the ranks. 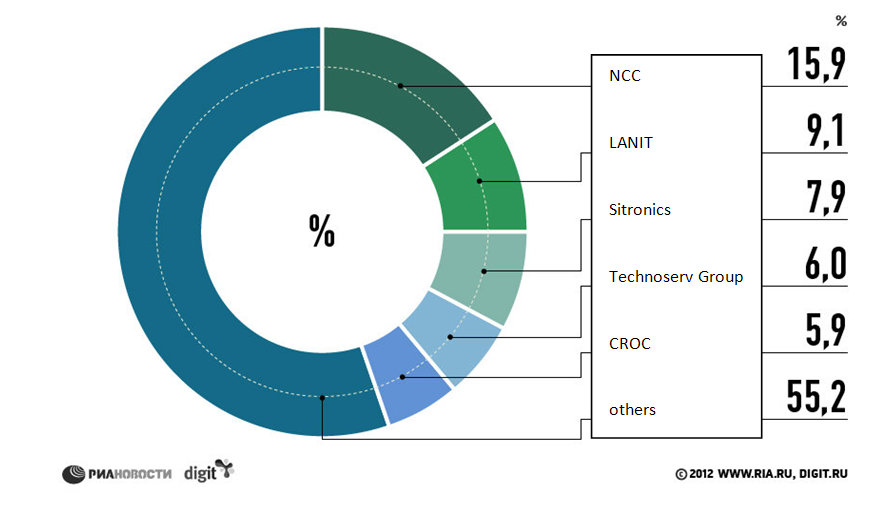 Top 10 largest companies in the IT industry by revenue in 2011, billion Rubles In 2011, there were several key growth points. First of all, demand for computer hardware and storage systems increased. Large customers made investments in improving business efficiency and certain customers started to create their own commercial data centers.

Our telecom business grew significantly, mainly due to demand for data transfer and telephony systems as companies sought to improve sales efficiency and service quality. In addition, data network optimization also remains a hot area as these projects deliver tangible results in a short timeframe.

Our infrastructure project business grew by 50% in 2011. Particularly noticeable was the increasing interest in virtualization, including desktop virtualization, which not only helps to reduce investment in opening new offices but also improves reliability and security as well as user independence.

Attention to information security is growing and last year was no exception. The fact that companies are doing their best to protect themselves from both external and internal threats means that data leak prevention and anti-fraud solutions are in demand. In addition, companies are increasingly adopting an integrated security approach: for example, firstly by having their IT systems audited for security gaps and then by integrating new security solutions with existing business applications.

The focus on IT cost optimization is leading to increased demand for data center outsourcing services: this particular business line quadrupled in 2011.

Speaking of market trends, the trend towards improved governance and transparency of business processes within corporate organizations remains steady after the crisis, with technology becoming imperative for efficient process management in large organizations. This explains the increased demand for BPM systems, software development and electronic document management.

Interest in cloud computing has finally translated into the first projects in this area. Still, most companies continue to look into this technology, evaluate whether it can satisfy their needs and run pilot projects. Furthermore, we are seeing rising interest in green technology, with Russian companies finally starting to understand that it is truly beneficial, not just eco-friendly. Finally, business tools such as audio and video systems, video conferencing and data mining solutions also remain relevant.

2011 was a year of sustainable growth for all of the Top 30 IT companies, with no exceptions.

In 2011, IT market volume increased as a result of substantial growth within the software and IT services markets as opposed to traditional hardware, which had prevailed in previous years. Thus, RIA-Analytics’ forecast that the hardware segment would decline and give way to software and services proved to be absolutely correct. However, according to preliminary estimates from the Ministry of Communications and Mass Media, the total number of personal computers in Russia reached 74.4 million at the end of 2011—almost a 20% increase compared to 2010. In addition, the number of Internet users increased by 5.4% in 2011 to reach 70 million, including 55 million active users. The Ministry of Communications and Mass Media expects this figure to reach 90 million in 2013.

IT industry development is usually ‘synchronized’ with that of the overall economy. As a result, when the Russian economy is growing, the IT industry also expands—usually at a much faster rate than the economy in general. However, in the case of any crisis symptoms, the IT sector collapses with terrific speed. For example, certain IT market segments decreased by more than 50% in 2009 after the recent downturn.

According to the RIA-Analytics review, the Russian economy recorded adequate growth in 2011 (above government forecasts), partly as a result of high oil prices.

IT companies outside the Top 30 accounted for less than 10% of the [total] market. Nevertheless, we still publish the ratings of companies which come close to the Top 30 and may challenge for leadership with today’s Russian IT industry giants in the future. Especially as some of these companies increased turnover by more than 100% YoY—an achievement no player within the Top 30 could match. It is clear that the smaller the company’s market share, the greater its growth opportunities. Furthermore, as second-tier companies grow, competition increases in intensity — something that is beneficial for further market development.

Among the players which ranked 31-50 in the rating, more and more regional companies can be found: nine out of the twenty companies are not based in Moscow.

RIA Analytics expects Russian economic growth to slow down in 2012 which, in turn, will affect the IT industry. Therefore, the IT market growth forecast for 2012 is 10-12% — i.e. less optimistic than for 2011.

Another unfavorable factor for the Russian IT market is the wish of many vendors which offer cloud computing solutions to deal directly with customers, thus by-passing integrators and removing this “unnecessary” link from the traditional supplier-integrator-customer chain. In fact, many vendors have committed to offering B2C solutions and openly declared that integrators will have to find new market niches. Despite assurances from most integrators that vendors cannot do without them, this trend could still continue to develop and cause Russian integrators to lose significant market share.

In addition, the Ministry of Communications and Mass Media suggests encouraging foreign IT manufacturers to deliver goods to Russia without involvement of intermediary parties in order to make the Russian IT industry more efficient and transparent. To achieve this aim, amendments to Russian legislation shall be made, and the Ministry is ready to initiate them. If such amendments are made and come into force, a substantial number of ‘intermediary’ players (including distributors) will lose considerable revenue share.