Recruiting IT managers: in offshore and nearshore regions, in Romania and Vietnam, or in France, Pentalog is drawing managers from multinational companies 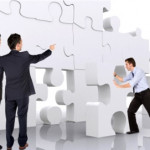 In just a few days, Pentalog recruited three first-rate managers coming from Alten, General Electric and Lexmark. They are joining us to fill the following positions: Assistant Quality Director (based in Bucharest), Project Director (Orlйans) and Delivery Center Director (Hanoi). Welcome to Anca, Sйverine and Marc!

There are more and more people working for high-calibre companies who decide to join us in order to take up important positions. This recent phenomenon is gaining momentum. Pentalog offers these young managers a unique company project through the balance between the size, the technical and strategic levels of projects and the focus on strong human relations and on the evolution of the whole through its parts.

Pentalog has as many as 60 simultaneous projects, which involve up to 100 employees for several years, in approximately 20 countries (France, Germany, Romania, Korea, Vietnam, USA, India, Israel, Switzerland, Moldova, Belgium etc.).

At Pentalog, they can also find trilingual colleagues (more than 75% of them!) who are involved in mobile platform development projects, understand an entire electronic board, are able to deploy a whole IT system of a bank (which has already been done), collaborate with some of the most important telecommunications operators, integrate and develop e-commerce platforms that generate sales volumes of more than 500 million euros, and have an internationally recognized M2M experience.

In short, Pentalog, which was until recently a high-level offshore IT company, has become a first-rate, multi-vertical, multi-channel global IT player which is recognized by the most important European clients and the best start-ups: 2 major subsidiaries of the Ericsson group, 4 subsidiaries of the Orange group, 3 of the Sociйtй Gйnйrale, one of GDF, Karavel Promovacances, Suez Environnement, Sierra Wireless, Strator (Imperial Tobacco Group), the Austrian Press Agency, TraceOne, the Elster Amco group, the Swiss Group Givaudan, Spir etc.

What they are all looking for at Pentalog is this unique cocktail which will enable them to make professional progress a lot faster and lead an exciting social life within a high-quality group of people. In 2011, twelve Pentalog employees (including developers) became associates, with company participations of between 0.2 and 3%, for a company value which is currently estimated at 25 – 35 million euros.

On April 30th, the Pentalog group had 70 more employees than on December 31st 2010. So, welcome to Sйverine, Anca, Marc and all the others, and thank you for your confidence!