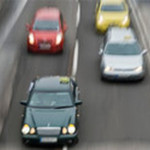 Dozens of dissatisfied taxi drivers battled the heatwave on Tuesday to take part in another protest drive from the Bratislava borough of Petržalka to the city centre via SNP Bridge, TASR learnt on the same day. Bratislava’s taxi drivers have long been protesting against alternative ride-hailing services operated via mobile apps such as Uber. Many licensed taxi drivers think that two years is long enough to resolve the issue or at least to start addressing it. However, the authorities are inactive, they claim. “Negotiations haven’t brought light to the issue, and we don’t want the state and audit authorities to ignore what’s going on here,” chairman of the Civil Association of Licensed Taxi Drivers Matej Krampl told TASR. He went on to say that taxi drivers don’t want to scrap mobile apps such as Uber completely, they just want to introduce equal business conditions and for alternative services to observe the same laws as licensed taxi drivers. Krampl added that taxi drivers are ready to fight until the situation improves to their benefit. Uber spokesperson for Slovakia and the Czech Republic Miroslava Jozová has responded to the protest. “Our goal is to keep cities moving and to connect passengers looking for safe, reliable and affordable transport with drivers who can share their cars and time,” she said, adding that traditional taxi services and new digital services can successfully coexist in a city. Jozová was asked whether Uber is considering leaving the Slovak market. “Uber doesn’t choose the cities in which to operate, the cities choose Uber,” she stated.