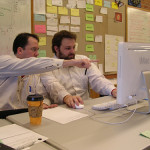 Banking and finance software develiper R-Style Softlab, based in Russia and owned by Polish company Asseco, is opening a new division in Crimea. Its office will be in Sevastopol.

The department will specialise in software development for the banking sector, particularly banks located within Crimea and nearby regions. The company expects that by the end of the year at least 50 Russian financial organisations will have opened up offices on the peninsula, all of them potential clients.

In the long term, the branch will become a fully-fledged centre for development, distribution and support, complementing the company’s two analogous divisions in Bryansk and Vologda. However, in discussing its plans for the new department, R-Style Softlab states that for the time being it is paying special attention to building organisational momentum, the construction of its Sevastopol office, personnel recruitment and carrying out initial staff training.

According to R-Style Softlab, up to now around 20 Russian banks have opened branches in Crimea. The company predicts that by the end of 2014 that figure will have grown to over 50. The company currently counts on a client base of around 375 banks in Russia.

As well as its head office in Moscow, R-Style Softlab has divisions in Bryansk, Vologda, Tolyatti, Kiev, and Almaty, as well as representation in the major Russian regions of Novosibirsk, Yekaterinburg, Nizhni Novgorod and Rostov-on-Don.

In the opinion of general director Andrey Galkovsky, the previously favourable conditions for training IT professionals in Sevastopol have disappeared:

“The exodus of big players has severely affected the market in experienced IT specialists. However, the high level of local educational institutions does help with the development of strong technical specialists.”

The size of the new department has not been announced, but the Vologda division, which opened in 2006 with 10 staff now has a workforce of over 180.