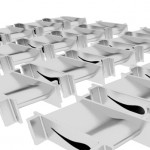 Big news on the Russian e-trade arena. For starters, this Monday news surfaced that JP Morgan has struck up a major deal in the Russian cyberspace – in fact, the largest deal in the history of Russian internet trade. The company has invested an undisclosed sum between $40 and $80 million dollars in the development of the Russian website Lamoda.Ru. The latter is a popular Russian online apparel retailer focusing mostly on trendy fashion, but also branching out to perfume and household items. According to official figures, the website has 5 million unique users and 500,000 “loyal customers” – which is pretty impressive, especially given the perceived low interest of Russians in online stores. The news was announced by the fashion retailer itself, although the details of the investment were only reported by third parties – hence lack of concrete figures. Previously the largest Russian e-commerce deal was believed to be Russia Partners, Balderton Capital and Bessemer Venture Partners investing $55 million in KupiVIP.ru – another online fashion retailer. So what is Lamoda to do with this heap of cash? Well, grow, of course – both horizontally and vertically, meaning increased presence in Russia with more brands and goods to offer and expansion to neighboring countries, such as Ukraine, Azerbaijan, Belarus and Kazakhstan – actually, Lamoda is already present in Kazakhstan, available at lamoda.kz. By the way, Lamoda was launched only in December of 2010 – less than two years ago – which makes its customer base seem all the more impressive. According to an article in Kommersant newspaper, the company explains their immense success by a few factors. The project was launched after the economic crisis of 2008, when Russian consumers’ incomes stabilized. Moreover, this year internet penetration increased to over 51% among adult population of Russia. Seeing as how Russia is huge country, this translates to 59,5 million people – Russia now has the most Internet users among European countries and these users are potential online shoppers. Seeing as how according to researches the average sum a Russian consumer is ready spend on occasional purchases is around $150 dollars, all these factors make online stores with affordable prices a good investment. And it’s a good market, too – people always need clothing, right? By the way, turns out that Russians are not only more populous online, they’re ready to spend more – the average occasional purchase bill in Europe is no more than $125.

An analyst of ABRT Venture Fund Andrey Gershfeld told the daily that currently the Russian e-commerce market has a “Big Three” – largest online retailers. They are the aforementioned Lamoda and KupiVIP and Ozon – we will talk about that one later today. Gershfeld believes currently the main objective for these companies is to optimize distribution infrastructure – i.e. to spend less on shipping and make sure goods are delivered as fast and as reliably as a possible. This is a good investment – even if a company does not become a leader, massive volume of the rapidly-growing e-trade market will make sure the company is profitable if it plays its cards right. According to calculations of the Data Insight marketing research company, the volume of the Russian e-commerce market in 2011 was 310 billion rubles – over $10 million. In 2015 it’s expected to grow 2.3 times – so yes, looks like Russian online retailers are indeed a good investment.

Although I believe I have to mention that Lamoda was mentioned in a controversial email last December – authored by Oliver Samwer, one of the founders of Rocket Internet, the company that initially launched Lamoda. In his letter addressed to employees, Samwer made very specific references to the mistakes Lamoda had made – basically used it as an example of how not to do business – but I guess either the company has made some significant changes or it will, with the help of JP Morgan’s investment. In any case, as we can see, Russian e-commerce is “where it’s at” these days.

Oh, I’ve found quite interesting the article in East-West Digital News – the publication has interviewed Global Head of Venture Capital, Aidar Kaliev from the leading Russian state-controlled financial group, VTB Capital. He shared his vision of Russian e-commerce as an investor.

Here’s what Aidar Kaliev had to say: ” On the one hand, this market offers a big opportunity. So far online retail has had little penetration, but it is growing very fast. E-commerce accounts for less than 2% of total retail sales, compared to over 10% in some advanced countries – so huge growth is ahead. In the middle term, Russia will also become one of the major e-commerce markets in Europe. On the other hand, Russian online retail is also a challenge. Very big investments are required in infrastructure. So far, certain business models which could develop relatively easily in the West, might be more difficult, slow, and costly in Russia. Among the issues are payments. For orders of physical goods, cash on delivery accounts for over 80%, and, as a consequence, cash flow and returns are issues. However, this is a chance for domestic players. Foreigners will have difficulties coming here, including importing their assortment and solving local infrastructure challenges. This is probably the reason why global ecommerce giants haven’t come to Russia, or have developed only a partial presence in the country.”

As you can see, he addressed some of the major issues at play here – with domestic players growing rapidly, international giants prefer to stay away. How about a headline from The Moscow Times newspaper, dated last year? ” Amazon Will Deliver to Iraq Before Russia” And, well, that’s true – even now it’s quite difficult to order something from Amazon or most other international retailers. Actually, some are looking to change that.

eBay is thinking of officially entering Russia. This June the company has has appointed Vladimir Dolgov, former Google executive, as general manager of eBay Marketplaces for the Russian Federation. The job, just like the company eBay Marketplaces were both recently created – most likely signifying that eBay is planning to first observe the Russia e-commerce market and eventually launch their services targeting Russia – for now Russians can only buy goods from eBay and only from vendors offering international shipping. The company issued a statement, explaining their decision: “Vladimir’s appointment reflects the increasing importance of the Russian market to eBay, and demonstrates eBay’s commitment to growing its business in Russia.” And here is where it gets interesting: before being hired by eBay, Dolgov was country director for Google Russia – he managed all Russian operations for the search engine giant. But before that, Dolgov was CEO of Ozon.ru, which is, as we have previously mentioned, one of the Big Three e-retailers in Russia and goes by the colloquial nickname of the Amazon of Russia – the names even sounds alike!

As promised, here as some news from Ozon. Well, first off, let’s look at what Ozon actually is: unlike the other three large e-retailers who focus mostly on apparel and designer brands, Ozon really tries to be the local version of Amazon: it’s Russia’s largest e-commerce store for books, audio and video, software, video games, electronic and digital goods; although I have to admit, recently it branched out to fashion. I guess Russians really hate doing their clothes shopping the traditional way. Actually, I can relate to that – snooty or clingy sales reps, crowds, changing rooms lines, the tedious search for your size… but I digress. Online sales of clothing is pretty big in Russia, let’s leave it at that. It’s not limited to Russian retailers, by the way – judging by my social network environment, a lot of people do their shopping on international apparel online stores, such as Asos. While this is quite subjective, the number of LiveJournal communities and social network groups as well as their large user bases, all dedicated to international e-shopping, all point out to one thing – more Russians prefer buying their clothing online. So, if you’re thinking of starting an e-business in Russia – looks like you have your leads! Anyway, back to the subject at hand – Ozon.Ru. Earlier this week the company posted sales figures for the last half year. They were a whopping 78% up to $232 million – still way behind Amazon, but, well, Amazon has an international audience and a few more years in business compared to the Russian counterpart. According to an interview which Maelle Gavet, Ozon CEO gave to Tech Cruch, “Ozon now has 11.1 million registered users; 17.3 million unique visitors to its sites. That’s including the user base of fashion commerce site Sapato.ru, bought at the beginning of this year and now “seamlessly” blended in with Ozon’s operations. Products in Ozon’s range currently stand at 2.2 million with plans for that to go up to 9 million soon, with the addition of a second warehouse. Revenue growth comes from strong performance across all divisions — Ozon.ru itself, Sapato, O-Courier and Ozon.travel — an online bookings service.”

From the interview, we can find a few more challenges of doing e-business in Russia, at least on such a large scale. Amazon recently led the book industry in a new direction with their eBook sales and, what’s more important, creation of a whole infrastructure, followed by a very successful launch of proprietary e-readers – Kindle and the second iteration, Kindle fire. Well, that just won’t fly here in Russia. Why? Piracy, of course. That and the currently-small size of the Russian market. Thus, as this point of time, proprietary e-readers or tables are not the best choice, it seems. As for something that can potentially work, well, the company now is looking at options in cloud services.

Source: The Voice of Russia