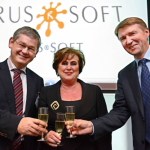 The Hague, 17 October 2013 During the 2nd Dutch-Russian ICT Business Event, held 16 October 2013 at the World Trade Center The Hague, the trade association for Russian and Belarusian ICT and software developers officially launched their activities. Present at the event was a trade delegation from Russia representing government and ICT enterprises.

From left to right: President of First Line Software, Mr. Nikolai Puntikov; Executive Director of the WestHolland Foreign Investment Agency, Ms. Marleen Zuijderhoudt and the President of RUSSOFT, Mr. Valentin Makarov, toast at the launch of RUSSOFT in The Hague.

“Innovation in ICT takes place through cooperation between different areas of expertise. This cooperation increasingly transcends national borders and thus cultural and political differences. Eastern European and Russian parties prove interesting partners, largely due to their high level of knowledge.” This was the conclusion of the panel discussion headed by Nikolai Puntikov, President of the First Line Software from St. Petersburg. The panel also discussed the opportunities and practical challenges of cooperation, namely an increasing demand for ICT services and labor shortages in the ICT sector in the Netherlands. In addition to the panel discussion the Russian ICT companies had the opportunity to meet Dutch ICT entrepreneurs through match-making and one on one conversation.

This ICT business event is an initiative of the WestHolland Foreign Investment Agency and is organized in collaboration with Netherlands Council for Trade Promotion and the City of The Hague.

“I’m very pleased with the successful and fruitful conference we held in The Hague. Above all it provided reliable evidence of the real interest for cooperation from both sides and proved the cultural proximity of the Russians and the Dutch. We decided to open our EU representative office in the Hague because of the favourable business climate, but what is more important – because of the friendly and energetic attitude we encountered both in public officers and organisations and in local businesses. I’m sure the office of Russoft in the Hague will let the Dutch and the European entrepreneurs get a broader and unbiassed image of Russian ICT industry and prospects for business opportunities,” Says Valentin Makarov, the President of RUSSOFT.

Henk Kool, Alderman for Economic Affairs for the City of The Hague and Chair of the Board of Participants of the WestHolland Foreign Investment Agency, concluded: “The establishment of RUSSOFT is an asset to The Hague. Such a trade association in your city is a wonderful sign. This is especially the case when it relates to a high-quality, innovative company.”

This Dutch Russian ICT business event is a follow up to the event held in The Hague in November 2012, where RUSSOFT was, for the first time in Western Europe, represented as well. During a reciprocal visit to The St. Petersburg International Economic Forum (SPIEF) in June 2013, the City of The Hague, the WestHolland Foreign Investment Agency (WFIA), RUSSOFT and AIRR (Association of Innovative Regions of Russia) signed a Memorandum of Understanding (MoU) in which the establishment of a presence of RUSSOFT in The Hague was included. As a result of the event in 2012 and subsequent return visits there are now three Russian ICT  companies operating in the West Holland region: First Line Software and Acrodis in The Hague and Viziware in Sassenheim.

The establishment of RUSSOFT in The Hague is the first branch of the ICT branch organisation outside Russia.  RUSSOFT represents a network of 70 of the most technically skilled ICT companies engaged in software development in Russia and Belarus. Due to the high level of education in mathematics and physics, these countries’ have advanced knowledge and an innovative capacity in the field of information technology.

The WFIA assists international companies in establishing, expanding or relocating their operations to West Holland. The WFIA was founded in 2000 by the cities of The Hague, Leiden, Delft and Zoetermeer and the Chamber of Commerce of The Hague and the Haaglanden. The municipality of Lansingerland joined in December 2008. The WFIA is also supported by the Province of South Holland.