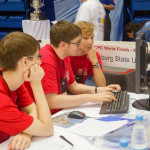 This is the second year in a row that a team from St. Petersburg has taken top honors in the competition and marks the seventh win for a Russian team since 2004.

This year’s championship was held at the Ural Federal University in Yekaterinburg, Russia on June 25.

Known as the Battle of the Brains, the contest brought together 122 student teams from around the world that were given five hours to solve a number of complex tasks touching on key trends in the IT industry including cognitive computing.

The team from St. Petersburg State University solved seven tasks in five hours, demonstrating an exceptional level of professional skills and the ability to quickly unravel complex tasks. The team returns home with The World’s Smartest Trophy as well as prizes and offers of internships or jobs at IBM and other leading IT companies.

“As one of the world’s leading technology companies, IBM understands how important it is to help students and motivate them to explore the latest technological advances,”

said Alain Azagury, head of IBM Software Group Technical Strategy, a member of the IBM Academy of Technology and the head of the ACM ICPC sponsorship program.

“Each year, ACM ICPC brings together the world’s best student programmers and gives them the opportunity to solve real-world problems. We believe that these students are the future leaders of our industry, and we want to contribute to their development and preparation for future work. We hope that the awards will help us build a truly intelligent planet,”

In addition to participating in the championship, students had an opportunity to get acquainted with the latest developments coming out of the IBM Research & Development Labs and chat with leading international experts in the field of information technology.

“ACM ICPC is a great opportunity for students from around the world come together and share valuable experience,”

said Dr. Bill Poucher, a professor at Baylor University and executive director of the competition.

“I am pleased to see how young people use the knowledge gained in the course of the competitions for the further development of their academic and career path as members of the Association for Computing Machinery.”

Russian teams have traditionally been among the top finalists in the tournament. In addition to the previous wins by the ITMO team, in 2011 the fourth, fifth and sixth places were taken by St. Petersburg State University, Nizhny Novgorod State University and Saratov State University, respectively. In 2010, the team from Moscow State University won second place. Over the past ten years, Russian students have taken first place in 2004, 2006, 2008, 2009, 2012, 2013 and 2014.