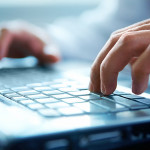 According to the Ministry of Justice, there are more than 200,000 individual entrepreneurs in the IT sector in Ukraine. In 2020, their number increased by almost 30,000. Now Ukraine ranks 11th in the top 50 countries with the best programmers. At the same time, we have a big problem with getting a high-quality IT education and not only. The Page has found out where Ukrainian programmers study, how much they earn and what difficulties they face in their work.

According to the Ministry of Digital Transformation, Ukrainian universities graduate 15,000—17,000 IT specialists annually, and about 40,000 new vacancies appear on the market. Programmers are mainly trained in higher technical educational institutions (there are more than 50 in Ukraine), in various academies, and schools.

For example, DOU.ua compiled a rating of the most popular Ukrainian universities in such IT smajor as: Computer Science, Software Engineering, Cybersecurity, Computer Engineering, Automation and Computer-Integrated Technologies, Information systems and technologies, System analysis. According to the results of the 2020 admission campaign, the Ukrainian Catholic University ranked first. Taras Shevchenko National University of Kyiv and Lviv Polytechnic ranked second and third, respectively. However, market experts believe that in many educational institutions the learning process is far from modern requirements.

Such courses often do not have a unified programme that would eventually come together. Therefore, learning is chaotic: someone learns to code in Python right away, someone starts to learn Java. But iactually, a programmer’s job is not just coding. Project management is also important here (understanding where an IT project starts), as well as teamwork, the ability to set, divide and delegate tasks, and knowledge of how exactly the hardware works: servers, boards, etc.

An alternative to this approach can be courses from Coursera or other platforms developed by foreign universities. However, not everyone will be able to master them, since they are usually taught in English. 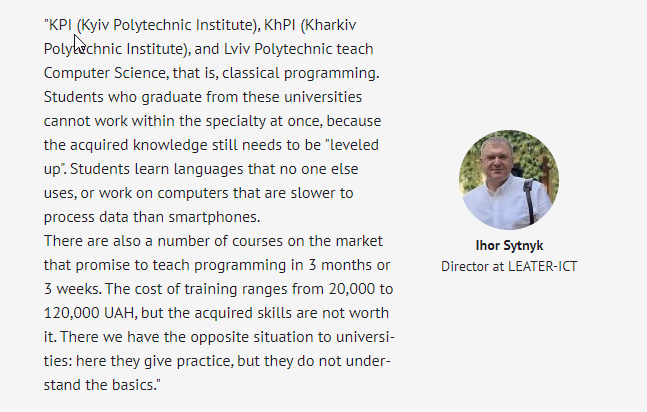 So where else can one study as a programmer in Ukraine?

Vitaliy Minyaylo, CEO and co-founder of the IT company Neurotrack.tech, says that among the institutions working in this area, there is the computer academy STEP that has 105 branches in 22 countries. She trains programmers, designers and other professionals. The Mate Academy programming school organizes training in such a way that theory occupies 20% of classes, the rest—more than 500 hours—is practice. School for developers GoIT positions itself as a place where absolutely everyone can master IT, and constantly holds online marathons.

Courses last six months on average, the theory is specialized, the priority is the practical use of the information obtained.

Realizing the shortage of personnel in the market, IT companies themselves create their own courses and schools. EPAM, SoftServe, GlabalLogic and others “grow” the staff for themselves. But they train the specialists they need.

There is also an alternative view of learning. For example, Dmitrij Sofyna, CEO at IT-Association Vinnytsia, said: if a student, before graduating from a specialized university, gets a job in an IT company, as most do, then he does not need a diploma at all. He will get all the knowledge in practice.

What are the professional requirements for programmers?

The word “programmer” means almost 30 different specialties. But in general, any specialist in the IT industry should have such professional skills as:

What is the level of specialists that are currently working in the industry?

Requirements depend on the position. If for a Trainee it means having a good mathematical base and soft skills + the ability to learn quickly on their own, then a Junior should already code simple programs on their own. The ideal level is a Middle, when the programmer is already working independently, but they still lack experience for incredibly complex tasks or new technologies. A Senior is at the top of this list. 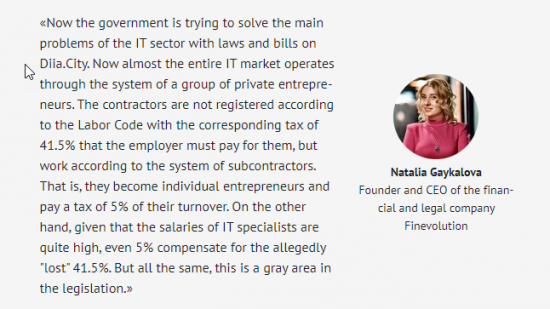 What is the level of salaries for Ukrainian programmers?

The salary of a programmer depends on their qualifications and competence. According to IT market experts, the average salary of young specialists in Ukraine is from $300 to $1200.

For comparison: salaries in the USA and Canada vary in the range of $4000—7000. That is, the salaries of Ukrainian programmers today are the same as those of specialists from Eastern Europe, and are approaching salaries in Western Europe with the prospect of reaching the level of income in the USA.