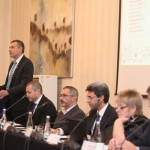 Sales revenues added 27.3% rising to 40.4 million levs, mainly due to attracting new customers and increasing the volume of sales to existing clients, Sirma Group said in a press release.