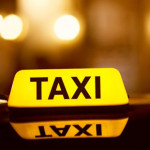 On Wednesday, taxi drivers held a rolling protest through Bratislava in objection to taxi drivers operating outside the law and private citizens carrying passengers through ride-sharing applications, such as Uber and Lyft, without holding passenger licences or fulfilling all legal requirements to do so.

This was announced by organisers of the protest, the newly established Civil Association of Taxi Drivers and the founder of Stop Uber in Slovakia.

The taxi drivers declared they do not want to block motorists, so they drove in the right lane when possible. They are fighting against unfair competition, which they believe has recently expanded.

“We mean a team of drivers who illegally provide taxis to cover their unlawful activities,”

explained the unhappy taxi drivers who are dissatisfied with the inactivity of authorities against drivers working for various applications and taxis, which, according to them, do not respect the current legislation on carrying paying passengers.

According to spokesperson of Uber Slovakia and the Czech Republic, Miroslava Jozová, their drivers are working in line with EU directives and registered users of the application are associated with reliable and safe transport providers, while being legally registered and fulfilling all their tax obligations. Jozová added that at the same time Uber drivers do not benefit from the privileges which taxi operators have.