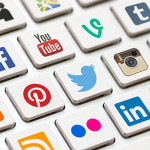 In today’s hyperconnected age, brands and publishers alike have new opportunities to interact with their audiences, but they also face new challenges.

Increasingly, they compete with not only direct competitors, but literally everyone when it comes to reaching and engaging users on social media. Once more, they’re forced to rely on social platforms driving a significant portion of their traffic— networks with their own agendas that have the power to halt that referral flow almost overnight.

In a world where our eyes are glued to a screen for nearly all hours of the day, it’s a battle they’re forced to fight if they want to be seen. In a recent interview with Social Media Week, Vox Media’s VP of Global Marketing Jonathan Hunt sets the scene well by explaining “to not have a social strategy, or to go all in on Facebook, runs the risk you’re not seen, and if you’re not seen you aren’t relevant.”

Besides realizing the number of social shares for the same number of articles grew from 2.6 to over 3.0 billion in 24 months, we discovered a few interesting changes among the key players and stakeholders in social media.

In that timeframe, the network has implemented dozens of changes, including several major developments in their News Feed algorithm directly impacting the visibility of brand and publisher content— and their referral traffic. (Not to mention they’ve grown their user data goldmine by acquiring other apps like Whatsapp and Venmo not long after buying out Instagram.)

From the inception of Instant Articles in May 2015 to the organic audience optimization tool in January 2016, some updates directly benefit brands and publishers.

At the same time, several updates over the past 24 months have put more emphasis on user generated content, likely in response to comments and complaints by users claiming the network has given too much power to publishers and advertisers.

While the professional networking site only sees 25 out of every 1,000 shares, LinkedIn has seen the greatest positive percentage change with a nearly 14% increase in shares over the past 24 months.

Though it’s been around since 2003, recent innovations like an updated messaging system in September 2015 and new premium insight experiences in 2016 can be attributed to the network’s jump in user growth, up nearly 150% in two years.

A logical explanation for the specific surge in sharing would be the debut and growth of LinkedIn Pulse, the network’s onsite publishing platform. Pulse merged with LinkedIn Today when 500 select leaders in business were recruited to publish original articles.

By 2014, publishing on Pulse was expanded to all users with the mission of helping members build their professional brand. (This would also explain why we found the top publisher on LinkedIn is not so shockingly LinkedIn.)

In distant second, though trailing far behind Facebook, Twitter lost nearly 30% of their share count in two years, down to just six out of every 100 of total shares. While the network arguably maintains its reputation as the network for breaking news, it’s widely known the platform is notoriously slow to innovate.

Though the network was quick to jump on the video content bandwagon through the growth of Vine and later the acquisition of Periscope, those channels have potentially passed their prime – with Vine being shut down soon.

Twitter has toyed with the idea of making major fundamental network changes, like increasing the classic 140-character limit and even tried to implement algorithm changes straying away from the typical reverse-chronological order, but many argue they risk losing loyal users through these changes.

Ultimately, as content continues to flood the social space, the half life of a Tweet continues to diminish with so much noise and limited ways to filter it.

With less than one out of every 100 shares, it’s clear Pinterest is not the platform for most publishers. With over two-thirds of content pinned coming from businesses rather than publishers, the network is clearly better suited for brands (and certain publishers) posting more evergreen and less breaking news content targeting a user base looking to shop rather than read the latest headlines.

Even so, with such a low share count in the grand scheme of things, it’s no surprise Pinterest made some subtle yet significant changes in the second half of 2016. Besides new aggregate pin counts, the introduction of promoted videos and ecommerce upgrades will help brands not only improve their visibility, but boost their online sales.

Pinterest is arguably late to the game when it comes to certain aspects like video content, but their ecommerce innovations are helping to reshape the network into the top social shopping platform.

While Pinterest saw a considerable decline in shares since 2014, numbers for Google+ were in freefall with a 93% decline in total shares. Some argue the network never caught on because the platform offered too many features and was ultimately just an alternate version of Facebook.

It appears Google+ never found their niche, given that Facebook already established its presence as the all-in-one social networking site; Twitter caters to breaking news, LinkedIn caters to professional networking, and Pinterest caters to social shopping.

Regardless, the network’s unofficial death nearly a year ago offers valuable lessons for marketers — namely, don’t put all of your digital efforts into one channel. 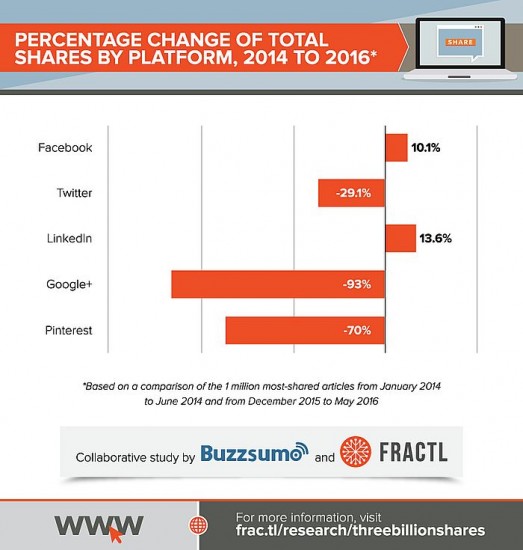 While successful engagement on each platform is dependent on various factors like publisher or brand vertical, Facebook has historically offered the most significant traffic referral and social engagement. It’s very possible, however, that may be changing as a result of new competitors as well as evolving user demands and preferences.

Therefore, it’s important brands and publishers alike not only find ways to adapt to these inevitable changes, but also develop and maintain a balanced cross-platform approach.

These efforts can amplify visibility and engagement through complementary networks, and act as a way to hedge against potential issues such as unfavorable algorithm adjustments in one channel (or the entire death of a network.)

The rise of niche content: experts weigh in on this trend’s growth in 2017

Just like how Google+ failed to find a niche and suffered tremendously through a slow death, publishers lacking a specific target are losing social traction to their niche counterparts when it comes to social engagement.

While major publications catering to a general audience still rank high when it comes to total shares and average shares per top article, niche publications targeting a specific demographic or interest are gaining momentum with the creation of quality, shareworthy content catching the interest of smaller but highly engagement communities.

A comparison of our two studies reveal many niche publications saw a significant increase in social engagement.

Besides more of their articles ranking within the top one million most shared, the average number of shares per article rose significantly for publications like Self and Refinery29 that are serving certain demographics— 162% and 114%, respectively. Even local news publications like NOLA.com and South Florida’s Sun Sentinel saw a 81% and 70% increase, respectively.

It goes without saying these niche publications post unique content targeting a specific audience, a trend gaining attention among the experts as an effective content strategy for brands. Below are a few clips from key players widely recognized throughout the content and social marketing world confirming this trend is here to stay for 2017:

As new platforms emerge and put more emphasis on direct communication among friend groups and downplay the authority of publishers, the historically dominant networks are learning they either must innovate or die out.

Meanwhile, the publishers and brands relying on the networks must not only be cognizant of these constant changes, but also adapt and innovate alongside them to ensure they can maintain and grow their social presence.