American companies plan to continue to implement their current strategies for sourcing some functions offshore despite the current worldwide economic slump, and the financial downturn may even accelerate such plans. These are among the findings of a study released today as part of ongoing research by the Center for International Business Education and Research’s Offshoring Research Network (ORN) at The Fuqua School of Business at Duke University and PricewaterhouseCoopers into the effects of offshoring trends on American competitiveness.

The survey, designed to capture business managers’ sentiments in the midst of the current global slump in financial markets and the presidential election, was conducted during the first two weeks of November and queried nearly 100 firms from the United States and Europe about their plans to source some job functions and business processes offshore.

While cutting labor costs is the most significant factor driving offshoring decisions since the worldwide financial crisis gained momentum this fall, many survey participants noted an increased urgency to improve efficiencies.

To cope with the slumping economy, companies plan to enhance efficiencies through business process redesign and by improving coordination and integration of offshoring processes.

“Redesigning business processes is not equivalent to end-to-end process re-engineering, which requires a significant commitment of resources and time,” said Charles Aird, senior managing director of Advisory Practice at PricewaterhouseCoopers, a founding member of ORN’s Best Practices Institute. “Our findings indicate companies can’t wait that long and can’t spare those resources; they want to improve their existing organizational capabilities for managing their offshoring strategies. This will require developing the discipline and the metrics to capture the benefits of existing and planned projects.”

Forty-one percent of respondents report increasing speed to market is becoming a more important driver of offshoring. Meanwhile, access to qualified personnel has not increased in importance, partly because rising unemployment is widening domestic employment pools.

As a result of the global economic crisis, renegotiating current contracts with service providers is emerging as a growing concern among companies. Forty percent of companies said they have pressured or plan to pressure providers to offer more favorable contract terms in order to trim costs.

Further cost-cutting options cited by respondents include delaying large-scale projects that require larger upfront investments and postponing some longer-term development initiatives. However, some companies noted providers could ease these pressures by offering to absorb some upfront costs. Companies said they may realize additional cost savings by lengthening implementation timelines or canceling or postponing discretionary projects such as software development.

While efficiency enhancement and cost reduction are among companies’ top priorities, 12 percent of respondents noted they are considering spinning off their captive operations to a provider or have already done so. Such an option would require significant time and effort to negotiate and capital resources for financing acquisitions are likely to be scarce.

Figure 1: Changes in the strategic drivers of offshoring decisions 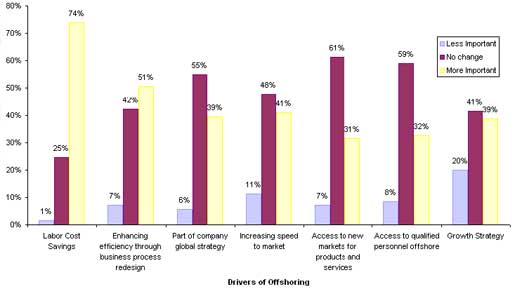