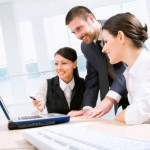 Ukraine ranks fourth in the world in the number of certified IT professionals. This was reported in the Association “Information Technologies in Ukraine.”

“Ukraine is ranked fourth in the world in the number of certified IT professionals (after the United States, India, Russia), as Ukraine is in the top 30 locations for the transmission of orders for software development. This shows the enormous growth potential for the industry”

– noted in the Association.

In Association noted that the domestic IT outsourcing market is the most dynamic countries in Eastern and Central Europe.Past three years, the industry has shown a 25% increase, which can be up to 40% per year by increasing the number and quality of IT professionals and service consumption growth in software development.

Recall, according to the results of January of the current year the volume of IT services grew by 42%.

According to official data, during 2013 the volume of services sold in computer programming and other services in the field of information amounted to 11.4 billion USD, which is 17.5% more than last year. Despite the difficult political situation in January 2014 y also showed growth in IT services. During the first months of the year they amounted to 842.7 million USD, which is 42.3% more than the same period in 2013.