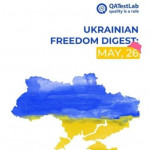 Regarding the company’s work, the QATestLab team continues to win on the economic front. Each of their projects is an opportunity to support the Ukrainian economy and develop the IT sector. With your support every day, the country and its IT specialists take another step to victory.