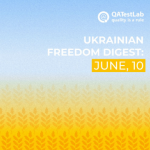 As for the company news, QATestLab continues to support the Ukrainian military forces. Earlier, the team announced that they had launched the direction of targeted assistance in our HR program. Every month the company processes a dozen employee requests, doubling donations from team members, and transfers the money to the Ukrainian defenders.

In addition to working on projects, QATestLab actively conducts online testing courses in Ukraine and Kenya. The training is carried out in Ukrainian and English, respectively, and allows students to master a new promising profession in a short time. In June, new streams will start for each of the countries. The best students that have passed the testing courses get a job offer from the company.